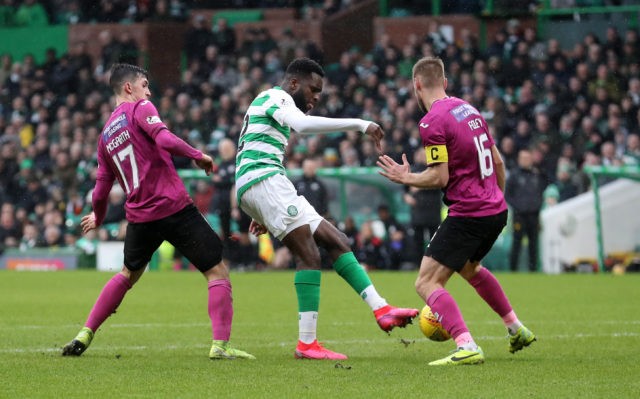 Lyon striker Moussa Dembele has showered heaps of praise on Celtic star Odsonne Edouard, saying he is a ‘fantastic’ player.

Dembele, the former Celtic striker, has tipped the French striker to reach the very top in the game.

Edouard has enjoyed a phenomenal campaign for the Bhoys where he netted 28 goals and provided 19 assists in all competitions.

Dembele, who left Celtic for Lyon in a £20million move, has revealed that Edouard was very shy when he first came to Parkhead.

The French striker helped him settle down and gave him a lot of advice. He has hailed Edouard as a ‘very, very good player’, but has lamented that they couldn’t play together for long.

“When he first came, he was a bit shy,” said Dembele.

“Because we come from the same place, I tried to help him. I gave him a lot of advice and after that he changed, from one player to another.

“Odsonne is a very, very good player. He will go straight to the top.

“I think we saw what he was capable of this season. He’s a fantastic player, a player that I rate and hopefully he’ll go to the very top with Celtic. I wish him only good luck.

“The only bad point is that we didn’t play together earlier. We knew that if we played together we’d do something good.”

There is a feeling that the French striker has outgrown himself at Celtic, and that he should test himself in a bigger league.

Edouard has been targeted by a host of Premier League clubs including Newcastle United and Everton, and it remains to be seen whether Celtic can keep hold of him beyond the summer.

The Bhoys value him at around £40m but it has been reported that a fee of around £25m would seal the deal for him.

Ideally Celtic would want him to stay and help them to win their 10th SPFL title in a row, but they would probably sell him if they receive a good offer for him.