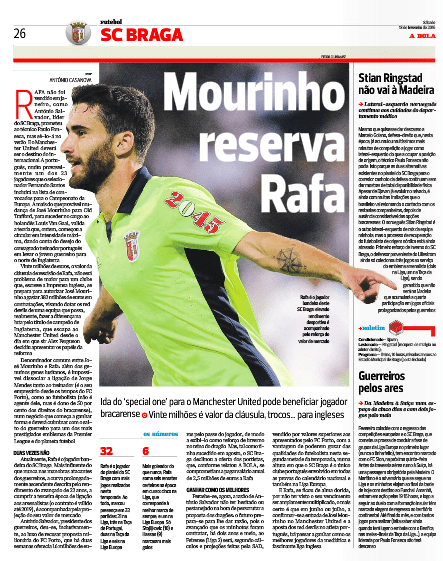 According to reports in the English media, Jose Mourinho is set to replace Louis Van Gaal in the summer as Manchester United’s new manager.

Portuguese media have now gone one step further and claimed that Mourinho has already identified his first signing as the Manchester United boss.

Braga’s Rafa Silva has attracted a lot of interest from several European clubs this season and is a summer transfer target for Manchester United, according to A Bola.

The highly talented Portuguese winger has scored six goals and registered three assists in 32 appearances in all competitions for club and country this season and is expected to be Mourinho’s first Manchester United signing this summer.

Manchester United scouted the player heavily last season but never quite managed to make a formal offer for the 22-year-old.

A Bola are now claiming that a formal bid is likely in the summer and that Mourinho has ‘reserved’ the player for Manchester United.

Considering Depay’s form this season, it makes sense for Manchester United to consider a tricky winger. The Old Trafford outfit are in desperate need of some creativity and pace out wide and Rafa Silva would certainly fit the bill.