Most Valuable Offensive Players Ranking: Kane will dominate second half of the Premier League 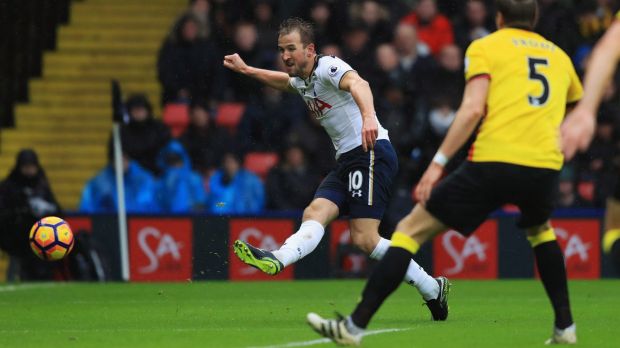 For the first 20 matchdays of the season, Diego Costa, Eden Hazard and Alexis Sánchez have proved themselves to be the best 3 players in the EPL this season. They have ranked in the top 3 of our Most Valuable Offensive Players (MVOP) ranking 5 straight times. It seems as if one of them will likely be crowned the MVOP. But we believe they will have stiff competition for the remainder of the season. In particular, Harry Kane will be their biggest challenger of all with a breakout second-half performance. 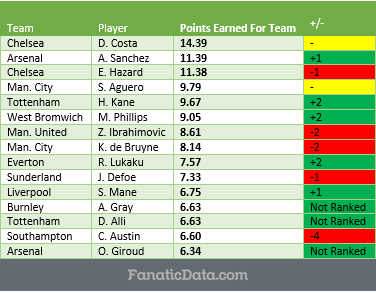 We believe in Kane because he has been in this position before. He started off slow and then finished strong last season. With another year of experience under his belt, there is every reason to believe Harry Kane will better his performance from last season and potentially finish higher than last year’s 3rd place finish.

Best of all, Tottenham doesn’t play against Chelsea again this season, and they also only play Manchester United once. These are the only teams Tottenham has lost to this season, so they have an easier road ahead. Another reason why Kane might be looking down on all of the players from the top of the MVOP rankings once the season is over.

We wrote about Zlatan’s success in our previous article. Despite his age, he continues to awe fans with his performance. What particularly makes Zlatan a candidate for the top spot in the MVOP rankings is the excellent performance of his teammates.

The revived Manchester United team has earned 6 straight victories. Zlatan’s teammates have discovered how to get the ball to Zlatan during this streak, which has allowed him to earn 27% of the team’s points over that span.

If you feel Matt Phillips seems to be involved in every West Bromwich Albion’s goal, you would be almost right. By our count, he has been involved in 11 out of the team’s last 16 goals dating back to Matchday 12. Quite an impressive feat.

The problem is, WBA isn’t consistently earning points. As a result, some of Phillips’s efforts in goals scored don’t actually earn him points in the MVOP rankings. If WBA starts playing with more consistency, Phillips will likely be mentioned in all of our articles moving forward.

We determined the most valuable starting squad through Matchday 20 utilizing the most commonly used formation in the Premier League: 4-2-3-1 (excluding goalies). 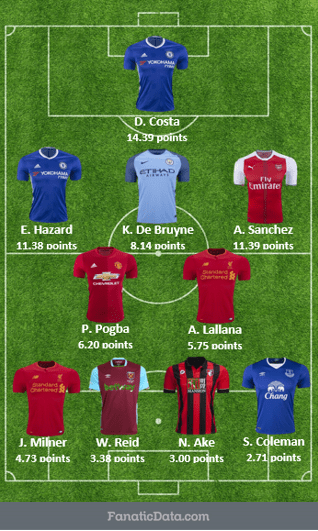 All of the starters remained the same from our last article. This is the first time that has occurred this season. Let’s see if this will be the trend for the Most Valuable Starting Squad moving forward.

Get an update for the rankings and starting squad after Matchday 22.