In the beginning of November, Zlatan Ibrahimović seemed done for. He has done a fantastic job over the past few matchdays to prove all of his doubters wrong. Ibrahimović was not even in the Most Valuable Offensive Player (MVOP) rankings until the latest update. Now, he’s in 5th place and within shouting distance of 1st place. 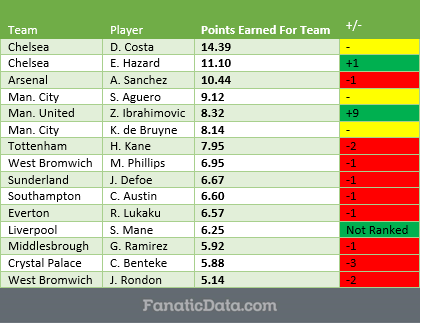 To crack the top 3, Ibrahimović has to better Arsenal’s Alexis Sànchez, along with Chelsea’s Eden Hazard and Diego Costa. This is not an easy task. It will be particularly difficult for Ibrahimović to overcome Chelsea teammates Costa and Hazard.

Chelsea is riding a ridiculous 12-game winning streak. A lot of the points from those victories have been awarded to the both Costa and Hazard. In fact, out of the 36 points earned by Chelsea over the last 12 matchdays, 18.19 (51%) of those points have been allotted to the two notorious players.

Ibrahimović will also need to keep an eye on Manchester City’s Sergio Agüero and Tottenham’s Harry Kane. Both players were two of the highest point earners in the second-half of last season. Agüero earned 95% of his points, and Kane earned 45% of his points in the second half of the season.

In short, Ibrahimović will have to continue to perform at his current level to prove he is the most valuable offensive weapon in the EPL.

We determined the most valuable starting squad through Matchday 18 utilizing the most commonly used formation in the Premier League: 4-2-3-1 (excluding goalies). 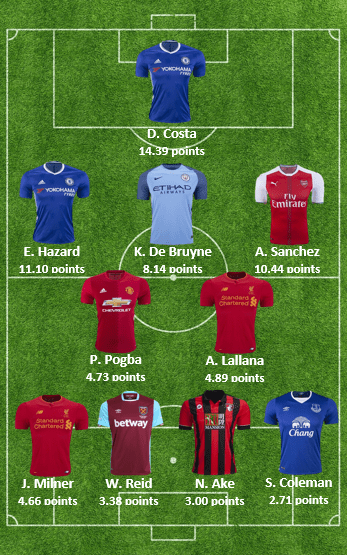 While the attacking players remain unchanged since Matchday 12, the central midfield and defence continue to see changes with each passing matchday. Liverpool’s Adam Lallana and West Ham’s Winston Reid made it into the Most Valuable Starting Squad for the first time.

Reid also became the first West Ham player to enter the squad. West Bromwich Albion, Burnley, Middlesbrough, and Sunderland are the only remaining teams to not have a representative in the starting squad this season.

Get an update for the rankings and starting squad after Matchday 20.