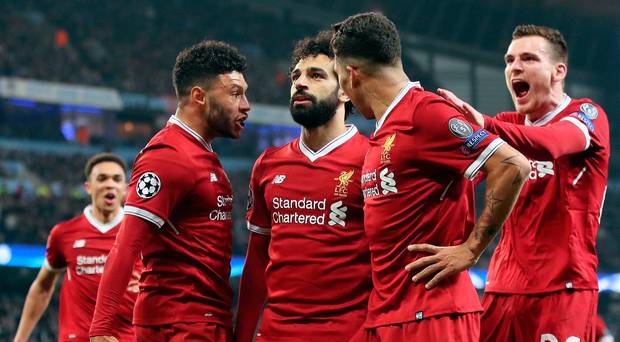 At the beginning of the season, our team made predictions for who we expected to become the Most Valuable Offensive Player (MVOP) in the Premier League at season’s end. We missed on all 4 of the players that we predicted could win the MVOP title. 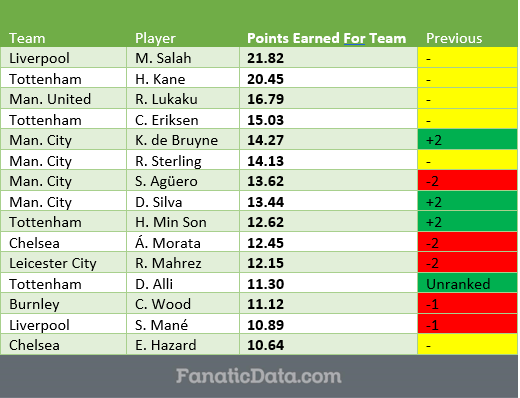 Out of our 4 predictions, Tottenham’s Harry Kane was one of them. As last season’s MVOP and still not having reached his prime, we expected Kane to be competing for the title this season as he did. Kane ended up finishing 2nd; his third straight top three finish. In the process, he earned over 20 points for his club, accounting for 27% of his team’s total points.

Our favorite to win the title was Romelu Lukaku of Manchester United. Lukaku had finished 11th in the previous season’s MVOP rankings with a support cast far less talented than the one he would have at Manchester United this season. It seemed our prediction was gold as Lukaku managed to score 7 goals in the first 7 league matches on his new team. But inconsistent play followed, and Lukaku ended up finishing the season 3rd in the rankings.

We thought perennial contender Eden Hazard of Chelsea would also have a strong shot at winning the MVOP. Chelsea were the reigning champions and Hazard’s goal partner, Diego Costa, had just left the team leaving most of the scoring duties to Hazard. Alas, Hazard missed the first 3 matches of the season and didn’t look quite the same even when he returned to the field. Neither did Chelsea for that matter, and Hazard ended up finishing ranked 15th.

Our final prediction was our dark horse pick Sadio Mané of Liverpool. Mané was absolutely on fire the previous season before a knee injury ended his season early. Despite missing a total of 11 matches the previous season, he still managed to finish in 13th place.  As a result, we assumed a season-long healthy Mané could really surprise the ranks. Sadio Mané ended up finishing 14th and it was not him, but his teammate that proved to be the ultimate dark horse in this season’s MVOP rankings.

Enter Mohamed Salah. Far from being a household name, Salah transferred from Roma having had a solid season in Serie A. Maybe it would have been logical to predict that Salah would be able to showcase his talent more on the offensive orientated Liverpool in a more offensive friendly league, but no one could have seen this ultimate result coming. Not only did he double his previous best goal tally in his first season at Liverpool, but he also broke the record for most goals in a 38-game EPL season.

In the process, he beat out Kane to finish as the MVOP king while earning close to 22 points for his side. This amount accounted for 29% of the teams total points which was also the highest percentage in the league this season. So through and through, he truly deserved the honor of being MVOP of the 2017-18 Premier League season.  Congratulations Mohamed Salah!

Based on the most popular starting formation in the league, we used the 4-2-3-1 formation to create the most valuable offensive squad of this season. 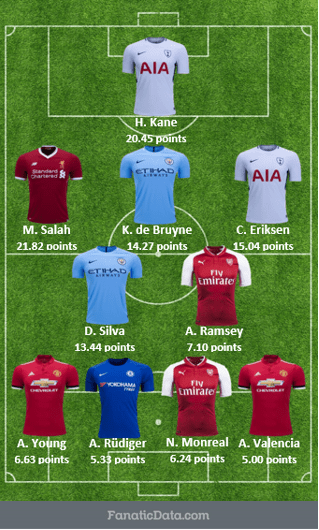 Without much surprise on the offensive front, Kane, Salah and Manchester City’s Kevin de Bruyne finished as the best players at their positions this season. A solid season by Kane’s partner Christian Eriksen resulted in him finishing as the second best winger this year.

City’s David Silva had a second coming like season and finished as the league’s best offensive central-midfielder. Arsenal’s Aaron Ramsey snuck into the top squad as the league’s second best central midfielder. Ramsey is just another testament to the parted Arséne Wenger’s ability to find diamonds in the rough for the better part of 3 decades at Arsenal.

The defensive line is made up of United’s two full-backs: Ashley Young and Antonio Valencia. They successfully managed to stay together on the squad starting on Matchday 18. Chelsea’s Antonio Rüdiger proved to be a valuable offensive threat as a central-back as he managed to hold that position since Matchday 22.  Alongside Rüdiger is Arsenal’s Nacho Monreal who had a new role in Arsenal’s new 3 back system.  He played consistently the entire season and appeared on the starting squad more than any other center-back.

That wraps up yet another season of the MVOP rankings.  Thank you for keeping up throughout the season and we look forward to a fresh new season come August.