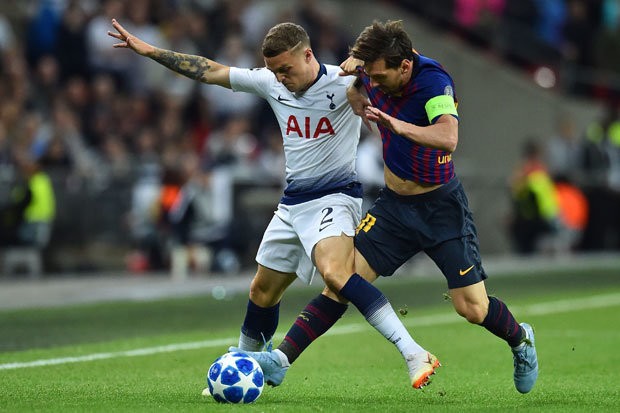 Kieran Trippier produced a fantastic cross from which Lucas Moura scored during Tottenham Hotspur’s 3-2 win against Wolves in their last Premier League game.

However, the England defender came under a lot of criticism from the Spurs fans for his sloppy defending. The general feeling among the fans is that Trippier is excellent going forward, but he is vulnerable at the back.

The 28-year-old, who impressed during the 2018 world cup for England in Russia, is a key player for Mauricio Pochettino’s side, but there are a lot of areas where he needs to improve.

Spurs boss Pochettino sounded unhappy while talking about his side’s poor defending in recent games. Ahead of Tottenham’s important Champions League clash against PSV Eindhoven, Pochettino has reminded his team about the importance of working off the ball.

The Argentine has said clearly that Trippier, who joined the club in 2015 from Burnley, needs to improve defensively.

“You are going to see or have the answer. We provide [Kieran] with the platform to go forward because we create the system and dynamic to put him in the best position to play. In a different situation, I think he is a full-back, not a winger,” said Pochettino as quoted by the London Evening Standard.

“It’s like no different full-back in the world. When you are in possession and go forward, you need to be strong too when you are in a defensive situation. We always compensate.

Tottenham find themselves third in the Group B table with 1 point. They will have to beat PSV Eindhoven on Tuesday to have any slim chance of progressing through to the next round of the competition.