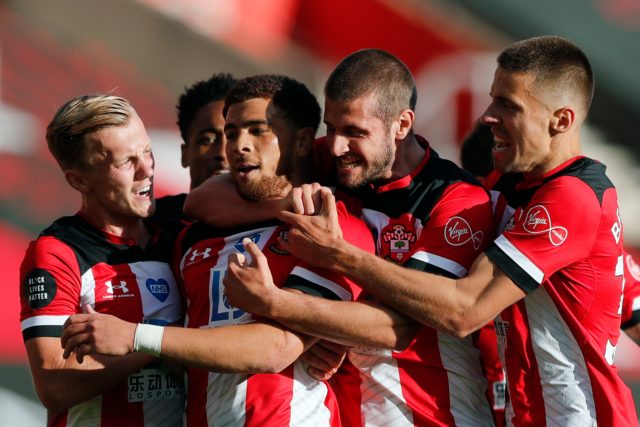 Che Adams scored his first goal for the club with a spectacular strike as Southampton won 1-0 against Manchester City at the St Mary’s on Sunday afternoon.

Adams, who joined the Saints from Birmingham City for £15m a year ago, scored from 40 yards out lobbying past goalkeeper Ederson.

It has taken 30 appearances for 23-year-old Adams to open his account for the Saints.

Former Saints player and club legend Matt Le Tissier took to social networking site Twitter to express his reaction after the game. He has praised Adams, Jack Stephens, and Jan Bednarek for their contributions.

City enjoyed 74% of possession and attempted 26 shots during the game, but couldn’t break Southampton’s defence.

The visitors reacted strongly after the goal. Fernandinho hit the post while David Silva’s header was kept out by Alex McCarthy.

The Saints goalkeeper made several superb stops but the pick of them was the one-handed save from Gabriel Jesus in the second half.

Nathan Redmond and Danny Ings couldn’t convert rare opportunities, but in the end, they did just enough to pick up all three points against Pep Guardiola’s side.

City have lost nine Premier League games this season, while Pep Guardiola has never lost three consecutive away league games before in his managerial career.