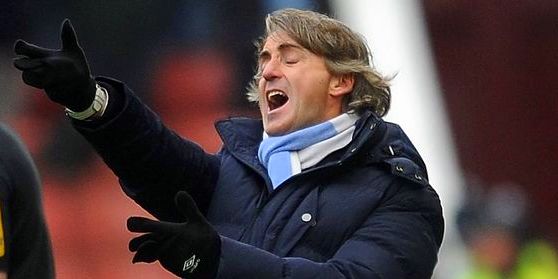 Manchester City manager Roberto Mancini has finally lost his cool in front of the press. The Italian swore in front of reporters and TV cameras as he was asked to comment on the latest speculation concerning his future.

City are 12 points behind league leaders Manchester United and with their hopes of retaining the title is hanging in the balance, his position has come under scrutiny.

Mancini was questioned last week over the situation of his job prior to last week’s FA Cup win over Leeds United but he lost his control after the same subject has been discussed. To be honest, no manager wants to hear constant discussions about his future and speculations in the media and Mancini is no exception.

Malaga coach Manuel Pellegrini has been linked with a move to the Etihad Stadium but Mancini was unfazed with such talks and instead responded with obscene language to the reporter.

He was quoted in the press:

“I cannot continue to answer about this every week. We have another two months. In two months you will know if this can happen but I can’t continue with this.”

“This is normal for you, it’s your job, don’t worry, but I can’t continue to answer each week about one (manager) or another or another.”

“But also because I don’t understand this – why would Manchester City change their manager? For what reasons?”

Mancini retains the support of the fans as he masterminded City to FA Cup success in 2011 and followed up with last year’s Premier League triumph, which is the club’s first league win in 44 years.

City will face Chelsea next in their next Premier League encounter at the Etihad and Mancini has expressed his concern over the fitness of his skipper, Vincent Kompany, who missed the last four games with a calf injury.