Three points for the home side would restore their cushion over the chasing pace for the automatic UEFA Champions League places as they go into the weekend one point above the side below them.

Southampton are unbeaten in four in the Premier League but it’s only one win in their last four away Premier League matches which include a draw at Aston Villa and being shut out in defeat at Burnley on Boxing Day.

Luke Shaw should be fit enough after coming off at half-time with an ankle injury versus Yeovil Town on Sunday. Rafael too only lasted 45 minutes at Huish Park but is also ready to play. The Brazilian will be wearing a facemast to protect his fractured jaw should he feature.

Marcos Rojo is still out with a thigh injury but otherwise Louis van Gaal has as many options in defence as he has ever had during his six months in charge of Manchester United.

Ángel Di María returned from his pelvic injury to score the second goal in the FA Cup last weekend and is ready to start versus Southampton this Sunday.

Wingbacks Antonio Valencia and Ashley Young are unlikely to be available whilst Marouane Fellaini is ruled out indefinitely. This fixture comes too early for Daley Blind who is on the mend.

Robin van Persie was rested last weekend so is fresh to go against the team he scored a brace against one month ago.

Ronald Koeman has the majority of his squad available but has lost influential Sadio Mané to a calf injury for more than a month. The Senegalese attacking midfielder had been in good form.

The Saints have brought in Eljero Elia on loan but whether he’ll be ready to make his debut in this game remains to be seen. The Dutch winger could be useful in this match as Manchester United may not know him too well, although we suspect manager Louis van Gaal will be prepared for him.

Jack Cork, Jay Rodriguez and Sam Gallagher are all injured whilst Emmanuel Mayuka is off to the African Cup of Nations to represent Zambia. 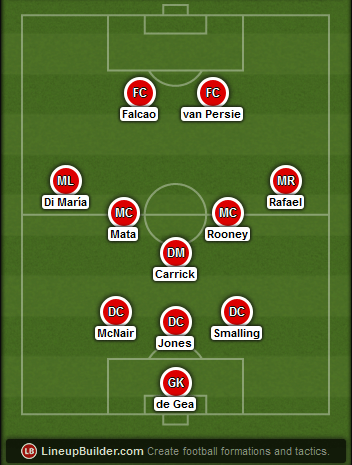 Louis van Gaal has played a 3-5-2 of late. We’re going with Ángel Di María to start ahead of Luke Shaw on the left, although the Dtuch manager could play both by sticking the Argentine in the middle. This formation does have both Di María and Juan Mata starting. Robin van Persie is a shoe in to return to the starting lineup, whilst Radamel Falcao has had a good run in the first team now, so no reason for him to be dropped. Jonny Evans has often been poor at centre-back this season so we’re not expecting him to start this weekend with the majority of defenders available. 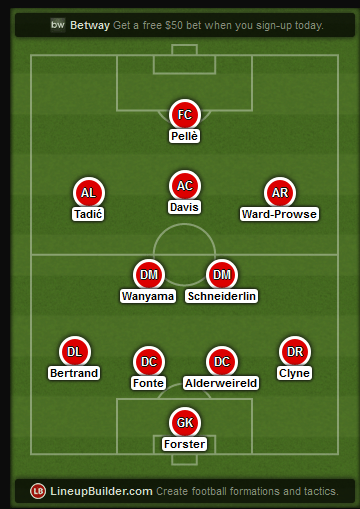 Southampton can replace Sadio Mané by moving Dušan Tadić back out on the left and Steven Davis in the middle. James Ward-Prowse and Shane Long can battle it out for the right wing position. The latter has made more appearances from the bench than as a starter this season. No changes need to be made in the defence from the four we have selected. The two holding midfielders are the regulars.

Robin van Persie vs José Fonte
Robin van Persie scored a brace at St Mary’s at the start of December. Toby Alderweireld wasn’t playing that day so in theory the Southampton defence will be tougher to break down this time (Maya Yoshida played that day). However, I’m unsure of José Fonte versus the top strikers. He was at fault for one of the goals in their 2-1 loss to Manchester United and I can see Robin van Persie getting the better of him at Old Trafford too.

Juan Mata vs Morgan Schneiderlin
A key battle in the centre of the park is going to be one of Manchester United’s playmakers versus Southampton’s best defensive player. It favours Juan Mata because he’ll most-likely have the likes of Wayne Rooney, Robin van Persie and maybe also Ángel Di María to pass the ball around with. Morgan Schneiderlin simply cannot cover them all so at some stage Manchester United are going to find clear cut opportunities in this match. Don’t expect Mata to have a quiet fame whomever he is up against.

Dušan Tadić vs Chris Smalling
Whilst we expect the home side to have more of the ball it cannot be ruled out that Southampton’s Dušan Tadić will cause some problems when the visitors are on the attack. The Serbian is a tricky customer and the Manchester United defence has hardly been too protective of David de Gea’s goal so far this season. Not shown the same form he did at the start of the season but don’t rule Tadić out of being involved in the goals in this one.

Prediction: Manchester United 2-1 Southampton
Southampton have a good defensive record but a poor record versus the top sides of late. Yes, they beat a (weakened) Arsenal side on New Year’s Day but a trip to an in-form Manchester United side at Old Trafford is a different beast. Louis van Gaal has his side on a roll – 11 unbeaten in all competitions and have won eight of their last nine at home in the Premier League. Southampton lost two of their last three away from St Mary’s.