Manchester United’s 2-1 win at Arsenal last weekend moved Louis van Gaal’s side into the top four and on a back-to-back winning sequence.

The Red Devils are heavily fancied to continue that run against a Hull City side who have lost three straight and won only one of their last 11 Premier League games.

Louis van Gaal may revert back to his 4-4-2 diamond formation this weekend after playing a makeshift back five at the Emirates last weekend that looked very shaky at times, albeit not conceding until deep in stoppage time.

Luke Shaw picked up an ankle injury last weekend but could return to face Hull on Saturday. Rafael, Phil Jones and Marco Rojo all remain sidelined.

Daley Blind could be out for a while with a knee injury and Jesse Lingard is yet to return since picking up an injury on the opening day of the season. Radamel Falcao has not played in over a month.

Mohamed Diamé missed last weekend’s loss at home to Tottenham but is expected to return to face Manchester United. Gastón Ramírez is suspended and Robert Snodgrass has been injured since the opening game of the season. 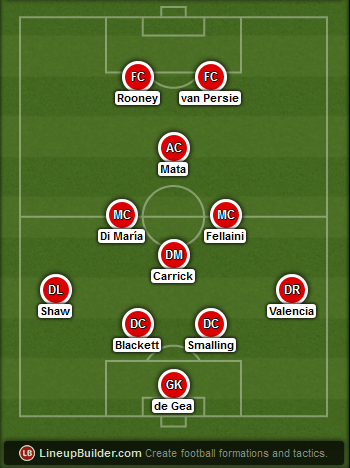 Predicting which formation Louis van Gaal will deploy is the first thing. We think two centre-backs will be enough against a Hull City side who have scored just one goal in their last four games. This also looks like a good game to start Juan Mata as we can expect United to dominate possession and Hull to have several bodies behind the ball at all times. Three centre-backs and three central midfielders will be tough to break down so Mata and Di María are two good options. 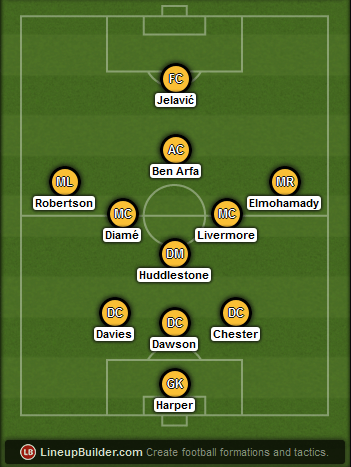 Steve Bruce likes three at the back with wing backs. Those wing backs will likely be full-backs this weekend. Packing the midfield will try to prevent the likes of Ángel Di María and Wayne Rooney having a big influence on the game. Hatem Ben Arfa is a good dribbler and capable of scoring from long range – perhaps Hull’s best counter-attack threat. Set pieces will be their main hope of scoring one would think.

Ángel Di María vs Tom Huddlestone
If Ángel Di María has a more central role than hanging out left he should have success in the one-on-one match ups when taking on the Hull City defence. Neither Tom Huddlestone nor Mohamed Diamé are the best when it comes to stopping the opposition running at them, truth be told. But double-teaming the Argentine may be the Tigers’ tactic.

Antonio Valencia vs Andy Robertson
We have Antonio Valencia down as right-back but he could easily play a right wing-back role on Saturday. Whichever position he starts in you can expect the Ecuador international to be bombing forward as United dictate possession. Often a poor crosser of the ball, Valencia’s cross did cause the own goal from Kieran Gibbs last weekend that gave van Gaal’s side the lead at Arsenal. Andy Robertson’s not been the best at stopping wingers running past him in his debut season and if the middle of the park is compact, going down the wings, something United like to do, would be a sensible option.

Wayne Rooney vs James Chester
Manchester United may need a moment of magic to open the scoring in this one with all the defenders behind the ball. Captain Wayne Rooney is certainly capable of that. Whether he plays the number 10 role or as a striker, he is capable of creating some space for himself and getting a good shot away. Hull City are without their first-choice goalkeeper too.

Prediction: Manchester United 2-0 Hull City
Expect Hull City to frustrate Manchester United for a while before the home side finally break through. The visitors will come here looking for a 0-0 but this United attack has so many weapons now that we simply expect them to break down Steve Bruce’s out-of-form side. Home win.