Manchester United are preparing a €50m bid for Lazio midfielder Felipe Anderson according to reports in Italy.

Gazzetta Dello Sport have confirmed that the Old Trafford giants are set to bid for the highly skilled Brazilian midfielder and that Lazio are ready to do business. 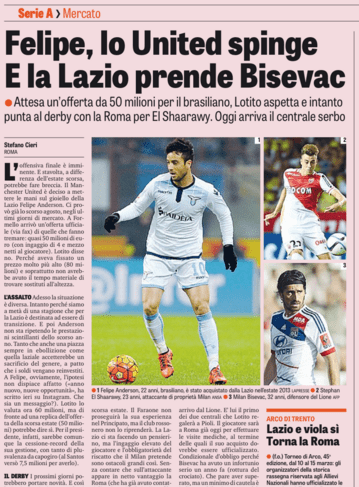 Furthermore, the rumours of a move have intensified after the player’s recent post on social media where he claimed that he is ready for a new opportunity in a new year.

Anderson has struggled with consistency this season, but the Serie A attacking midfielder is undoubtedly one of the finest attacking talents in Europe at the moment and would be a cracking addition to Manchester United.

Louis Van Gaal has spoken about adding some pace and goals to his attack earlier this season and Anderson fits the description perfectly.

Along with Martial and Depay, Anderson can form a deadly combination at Old Trafford for years to come.

Although the price quoted is quite huge for a player his age, Anderson has the potential to justify it in the long run and can be a Martial-esque signing at Old Trafford.