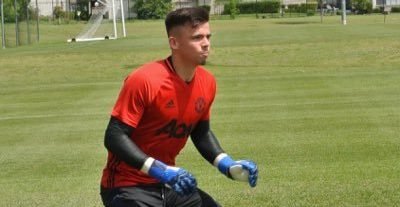 According to the Manchester Evening News, Manchester United are ‘set to release’ goalkeeper Theo Richardson at the end of the season, with the 19-year-old ‘prepared to depart’.

Richardson has reportedly been playing in exit-trial matches as he nears his United exit, having only made two starts for the reserve team this season. He could be one of five goalkeepers released this summer too.

Due to a shortage of goalkeepers at the time, the teenage shot-stopper joined United on trial last season and eventually made the move permanent. Things haven’t worked out, however, and he and four other ‘keepers could be moving on in the coming weeks.

Max Johnstone, Sam Johnstone, Dean Henderson and Ilias Moutha-Sebtaoui have all been tipped to depart in the report. Sam has been on loan at Aston Villa for the last 18 months and could make the permanent switch in the summer as he won’t be at United.

Getting into the first-team is a difficult task for the young goalkeepers, as Sergio Romero is backup to David De Gea. The pair boast a lot of top-level experience and aren’t likely to be dethroned by manager Jose Mourinho any time soon. As a result, a move away from Old Trafford may be necessary for them to further their careers.