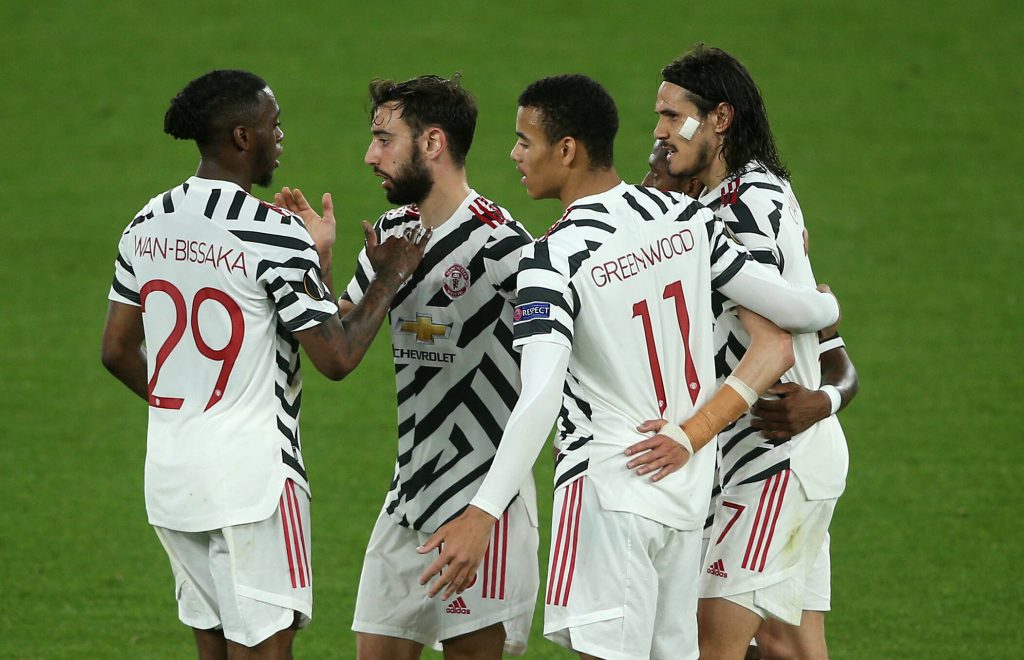 Manchester United progressed through into the final of the Europa League with an 8-5 aggregate win over Roma on Thursday evening.

Despite being beaten 3-2 but the Italians in the second leg at the Stadio Olimpico, Ole Gunnar Solskjaer’s side booked their place in Gdansk.

A brace by Edinson Cavani was bettered on the night by goals from Edin Džeko, Bryan Cristante and the debuting Nicola Zalewski.

United were fresh going into the clash as their scheduled fixture on Sunday with Liverpool was postponed due to fan protests against the Glazers’ ownership of the club.

In came defender Eric Bailly to play his first game since the Red Devils’ first leg of the Europa League quarter-final tie against AC Milan on March 11.

Midfield man Paul Pogba was included but knew that if he was to be cautioned against the Romans, he would miss a potential final through suspension.

In the opposition camp, it had been confirmed earlier this week that none other than José Mourinho would be taking charge at the start of next season as current manager Paulo Fonseca is set to leave this summer.

Fonesca still had to pick a side to try and fight back from a four-goal deficit and made five changes from his side’s 2-0 defeat away at Sampdoria in Serie A on Sunday.

Amongst the changes were former Chelsea and Barcelona man Pedro and 37-year-old Antonio Mirante in goal, who was brought on from the bench at Old Trafford last week to replace the injured Pau López.

Qualification for next season’s Europa League via league placing looks out of reach for Roma now, so they went into the game – winless in six – knowing that they would have to progress through to have any chance.

To do so, they would have to win the match by at least four clear goals, and they almost had one in the opening five minutes, first through Gianluca Mancini and then former United midfielder Henrikh Mkhitaryan.

A free-kick was floated into the area and fell to Mancini no more than five yards out. It had looked like the Italian handballed the ball to get it under control. However, no infringement was given by the officials, and goalkeeper David De Gea had to pull off a quick reaction save to deny the hosts, which certainly wouldn’t be the last time of the evening.

From the resulting corner, the ball was flicked on at the near post and met by Mkhitaryan at the back post, but his header hit the side netting.

A flurry of shots continued to bombard the Red Devils’ goal. Lorenzo Pellegrini and Pedro both saw strikes go narrowly off target, and De Gea blocked a low-driven cross behind for a corner from the right-wing after Luke Shaw was beaten by his man.

With their first real attack, the visitors should have claimed the lead on the night. Striker Cavani was played in over the top with a bouncing ball and tried to dink the ball over the goalkeeper and into the back of the net from close range. Sadly for the Uruguayan, this went just over the crossbar.

Soon after, he saw another effort palmed away from danger by Mirante, this was a game with many chances, and Cavani was eager to add to his goal tally.

De Gea then pulled off another smart stop to deny Pellegrini at his near post with a powerful drive, and somehow the game remained goalless.

That was until five minutes before half-time when Solskjaer’s men took the lead on the night and looked to be cruising into the final, 7-2 up on aggregate. Of course, it was Cavani who grabbed his fourth goal in as many games to put his side in front.

United broke with Bruno Fernandes and Fred, with the latter playing a nice through ball to Cavani to leave the veteran one-on-one with Mirante. From distance, he unleashed a powerful drive into the upright of the net. 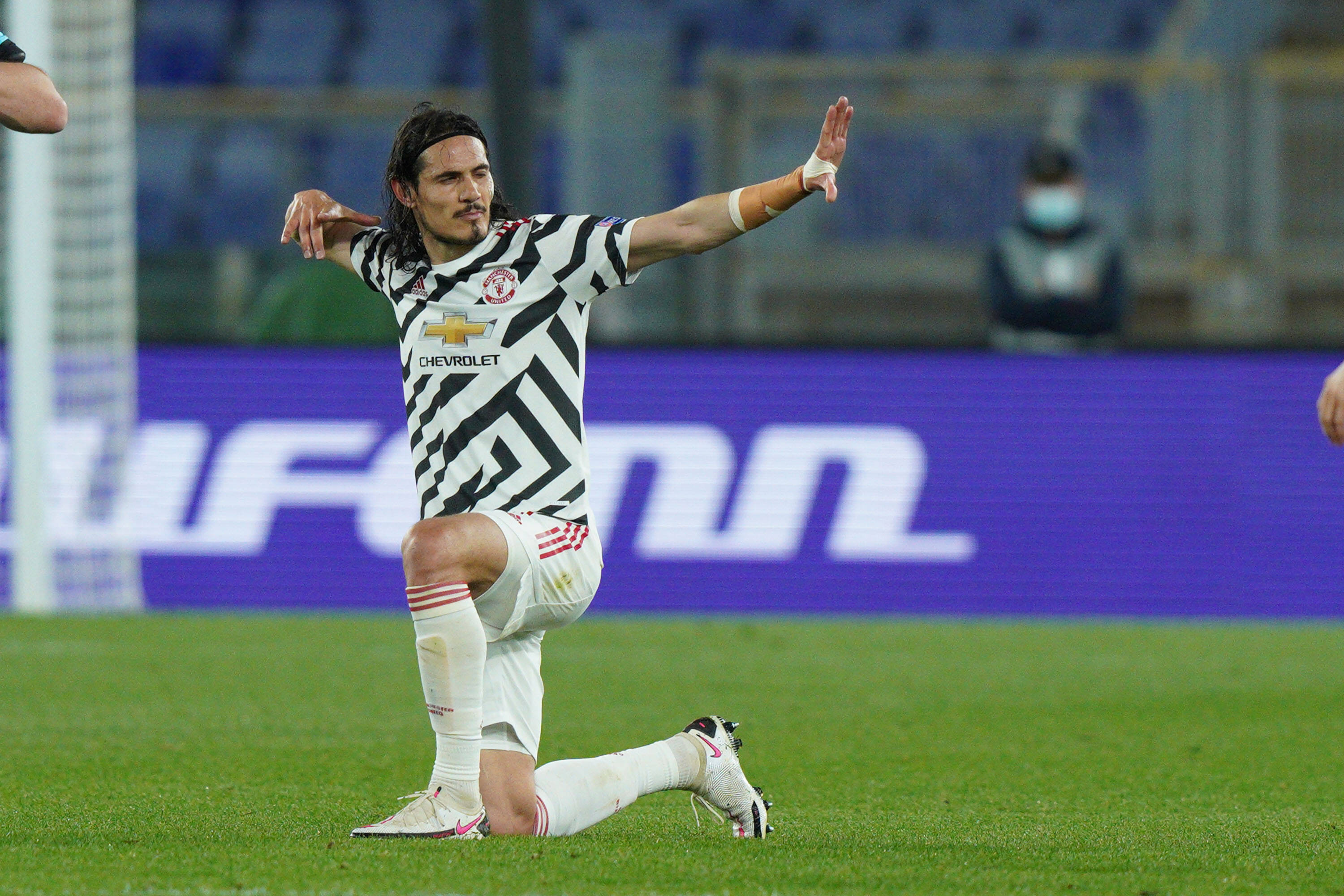 The scoreline didn’t change before half-time but – as was the nature of the encounter – it so easily could’ve done to either side’s advantage.

Mason Greenwood dragged a shot wide of goal before Mkhitaryan forced another good stop out of De Gea, and Fernandes could have grabbed a brace before the half was out.

However, the break came and Solskjaer took the opportunity to make his first substitutions of the evening.

Both full-backs – Shaw and Aaron Wan-Bissaka (on a booking) – were replaced by Alex Telles on Brandon Williams.

United were given a warning sign three minutes after the restart when Roma could have had a penalty awarded for the ball hitting the hand of Harry Maguire, deemed as accidental by referee Felix Brych and nothing given.

Much like the first 45, Roma had come out the blocks firing and wanted to salvage something from the game at least, and they did that with a goal by Džeko on 57 minutes.

Grabbing the ninth goal of his career against United, the Bosnian headed home from close range into an empty net as Pedro met a cross from the left by Mkhitaryan and drove a shot into the ground, which bounced up nicely for 6’ 4” Džeko to convert.

With half-an-hour to go, the hosts grabbed a second in quick succession through Cristante. Fred – just booked for a late challenge – lost the ball on the edge of his own area, which broke to Cristante. A smart first-time finish past De Gea ensued and Solskjaer’s side were rocking, back to 7-4 on aggregate.

In the following few minutes, De Gea single-handedly ensured that a third in as many minutes wasn’t conceded with some truly remarkable goalkeeping.

Roma broke forward down the right, and the Spaniard reacted with lightning speed to keep out an extremely close-range header from Džeko before getting back up to palm away a follow-up shot from Pedro, again from close range.

And less than 60 seconds later, it was another save from no more than 2-yards out, stopping a glancing shot by Mkhitaryan, although De Gea didn’t know much about this one.

Recognising that the team were in danger of imploding, Solskjaer brought on Nemanja Matić in place of Paul Pogba to put a block into the midfield area. Pogba escaped the evening without a yellow card and so would take his place in the final.

With the introduction of Matić, the Italian flow started to be stemmed and the Red Devils soon had an equaliser on the night, again from that man Cavani.

Grabbing his second goal of the game, fourth in the tie overall, and eighth of his career at the Stadio Olimpico, the 34-year-old effectively put the tie to bed once and for all 20 minutes from time.

On this occasion, it was a header which he couldn’t really miss and had teammate Fernandes to thank for an inch-perfect ball into the box to meet his run.

Either way, the striker settled any United nerves and had them Gdańsk bound for the Europa League final later this month.

He was withdrawn though having picked up a booking following a skirmish with both Mancini and Rick Karsdorp of the hosts.

While they were down and out of the tie, Roma knew that they could still win the game and deservedly did so.

They came close with Mkhitaryan and Džeko before debutant Zalewski scored the eventual winner on the night, having come onto the pitch to replace Pedro.

A Polish under-19 international, Zalewski met a cross from the left-wing on the volley and fired home through the legs of De Gea courtesy of a big deflection off the legs of Telles. Sadly for the youngster, it may well go down as an own goal.

That was to be the last goal action of the evening, so 3-2 on the night to Roma, but it would be United who progressed through into the Europa League final for the first time since 2017 with an 8-5 victory on aggregate. 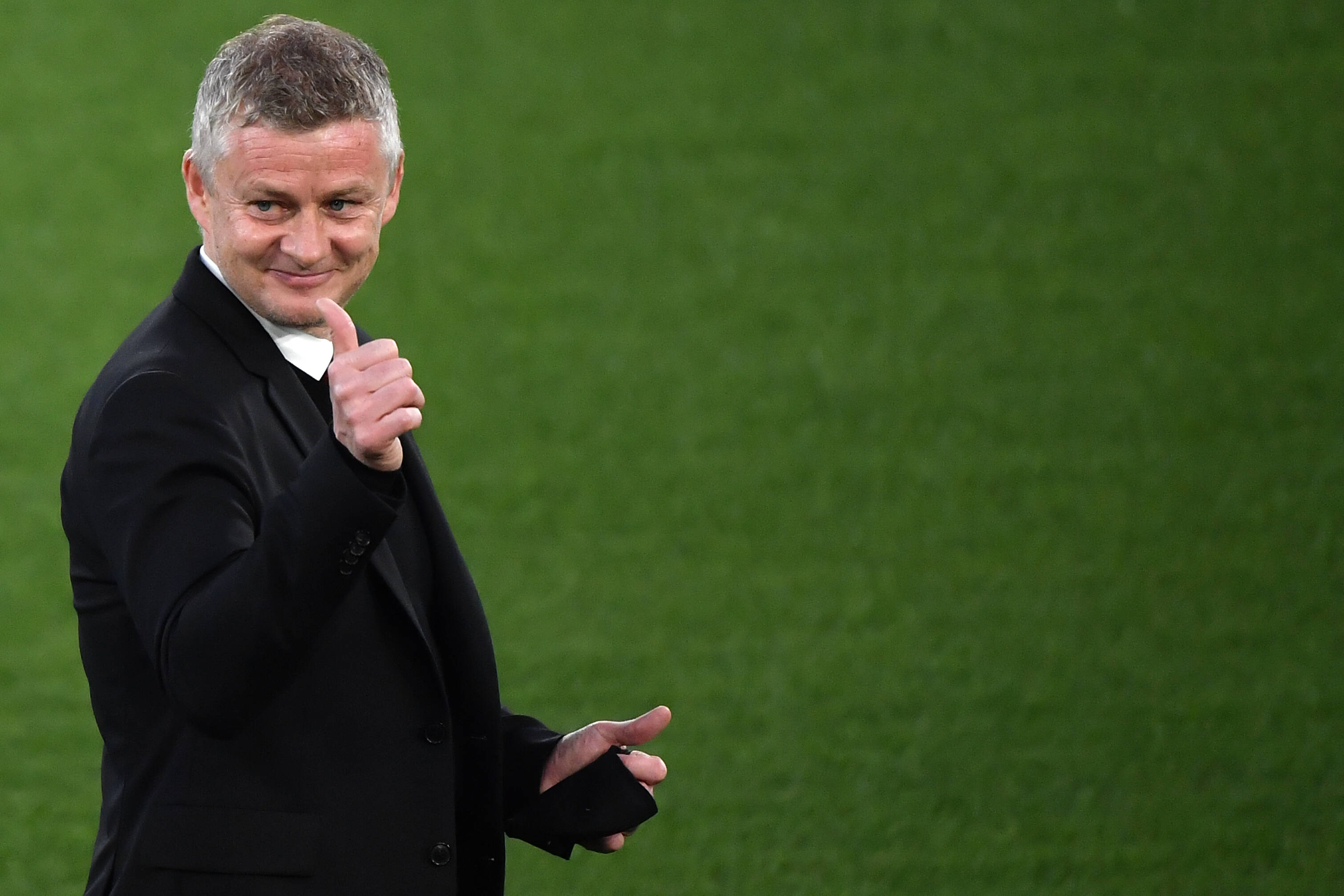 With the last four victory, Solskjaer has put an end to a cursed streak of four semi-final defeats in a row in all competitions and will – for sure – be happy despite United’s unbeaten run of seven games coming to an end on the night at the Stadio Olimpico.

The Red Devils will face Spanish outfit Villarreal in the final, as they defeated fellow English side Arsenal 2-1 on aggregate in the other semi-final.

United will head into that game as favourites, which is scheduled to be played at the PGE Arena in Gdańsk (Poland) on May 26 if all goes to plan regarding COVID-19 protocols.