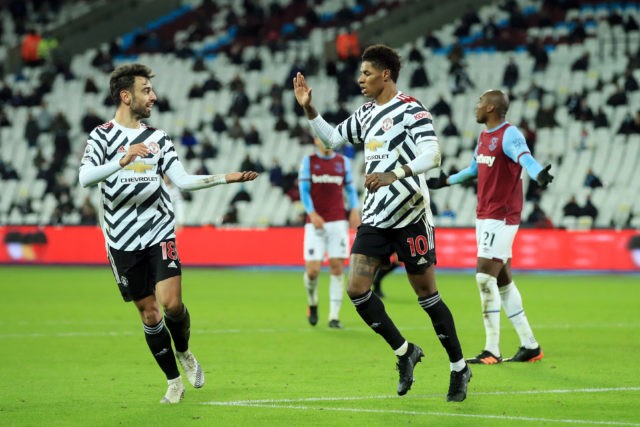 Manchester United moved to fourth in the Premier League table after beating West Ham 3-1 on Saturday at the London Stadium.

The Red Devils were completely outplayed in the first half but came from behind in the second to secure all three points, with Bruno Fernandes playing a massive role in their revival.

For the fifth successive away game this season, United fell behind but goals from Paul Pogba, Mason Greenwood and substitute Marcus Rashford turned things around for Ole Gunnar Solskjaer’s side.

The Hammers took the lead in the 38th minute through unmarked Tomas Soucek and could have added more, but Pablo Fornals hit the post and Sebastien Haller slipped at a crucial moment.

The introduction of Fernandes and Rashford completely turned the game around, as United revved up several gears after the break.

Pogba scored a fantastic goal from outside the box, but it required a VAR check to confirm whether Dean Henderson’s long clearance had curled out of play first.

Here’s how Manchester United players celebrated the win on Twitter:

Big 3 points, happy to be back on the scoresheet 🧨 pic.twitter.com/EaoolZv5tv

3️⃣pts + MOTM, not a bad trip down South 💪🏾♥️ pic.twitter.com/FAqxfFNSD0

This is becoming a familiar story for United – playing horribly, conceding a goal and winning the game, eventually, the hard way.

Solskjaer feels that it shows the mentality of his side that his players know they can pull it off, although Rashford has contradicted his manager’s view by saying they need to stop doing this.

Fernandes, once again, has played a big role. United have collected more points (51) than anyone else in the Premier League since the Portuguese joined the club in February.

The former Sporting Lisbon attacking midfielder has been key to United’s revival this season, with the 26-year-old scoring seven goals and contributing four assists in the league already.

He has created 35 chances – most by any player in Europe’s top five leagues this season. Over the years, the Red Devils have misfired in the transfer window, but Fernandes’ signing has turned out to be a massive success for the club.