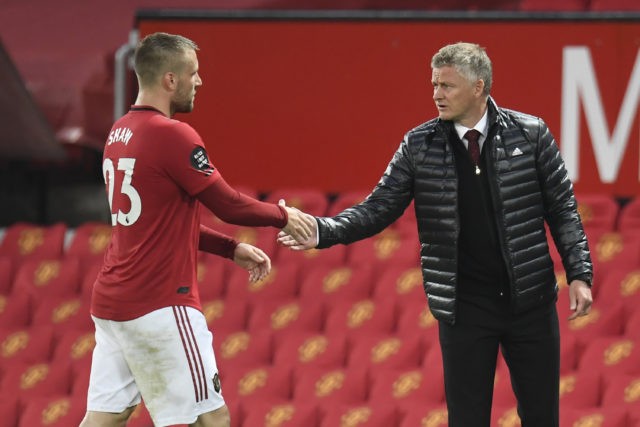 A selection of Manchester United fans on Twitter heaped praise on Luke Shaw following his sublime display against Manchester City on Sunday.

The Red Devils produced another impressive showing in the derby and ended up as deserved 2-0 winners at the Etihad Stadium.

Bruno Fernandes opened the scoring within the second minute through a penalty. Anthony Martial was fouled by Gabriel Jesus in the box after just 34 seconds.

The Red Devils held onto the lead until the break. Shortly after the interval, Shaw produced a moment of brilliance which gave the visitors a 2-0 lead.

Goalkeeper Dean Henderson delivered an accurate throw for Shaw who was at the half-way mark, and the Englishman managed to ride off the challenge from Joao Cancelo.

He then ran nearly 25 yards before passing to Marcus Rashford. The forward returned favours before Shaw’s shot went through the legs of Rodri to beat Ederson at the far post.

It was not the best of strikes from the left-back, but the shot was perfectly placed, and Ederson was only a spectator as the ball found the back of the net.

Shaw scored only his second goal of his league career, but he will remember it for a long time, given it came against the club’s fiercest rivals.

Several United fans were delighted with the defender’s showing, and here are some of the reactions.

Luke Shaw's glow up has amazing. Honestly wouldn't be an exaggeration to say he's been the best LB in the World this year.

By a country mile. I’ve been saying it and will continue to say it. If England want to win the Euros, they play Lukie boy @LukeShaw23 at left back. It’s that simple! #MUFC https://t.co/idAF3KgWZ3

Injuries have hampered Shaw since he arrived at United, but he has now started to find consistency having managed to stay healthy for an extended period.

In his last seven league games, the 25-year-old has been hugely productive from an attacking point of view with four goals and one assist.

He was beaten on a few occasions by Riyad Mahrez yesterday, but it was another good defensive display with nine ball recoveries.

England boss Gareth Southgate was in the stands keeping a watchful eye. Shaw should make the Three Lions squad and start in a couple of World Cup qualifiers this month.

In other news, Ole Gunnar Solskjaer has provided an injury update on Marcus Rashford after the derby.