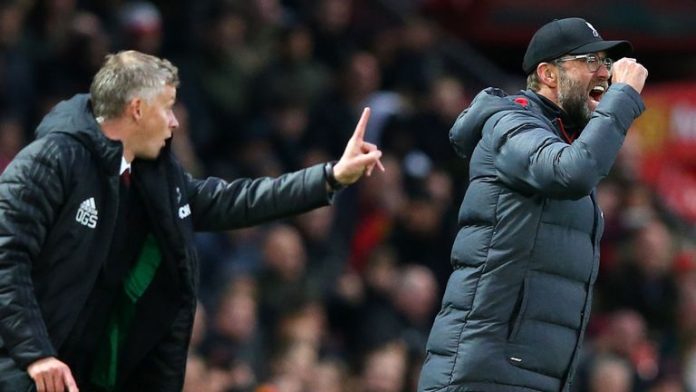 Liverpool host Manchester United on Sunday aiming to continue their seemingly unstoppable march to a first ever Premier League title.

The Reds hold a 14-point lead over Manchester City, with Leicester City a further two points adrift in third place, and it would require a collapse of epic proportions to allow that duo back into the race.

Jurgen Klopp’s side were fortunate to beat Tottenham Hotspur last weekend, but the ability to grind out results should stand them in good stead during the run-in.

If you bet on football you will not be surprised to discover that Liverpool are odds-on favourites to defeat United on Sunday.

Their 61-point tally is the most any team has ever collected after 21 games in a single season across Europe’s big five leagues.

Liverpool haven’t been beaten in the top flight since their 2-1 reverse at Man City back in January 2019 and it’s difficult to see where their next defeat might come from.

They haven’t conceded a goal in their last six matches in the Premier League, highlighting just how difficult they are to break down right now.

While Liverpool appear to be on the road to winning the title, United head into the weekend down in fifth place in the standings.

They are currently five points behind Chelsea and will be eager to bridge that gap to force their way into the top four over the coming weeks.

They demolished Norwich City 4-0 last weekend, but remain in a state of flux during what has been a largely inconsistent campaign.

United supporters repeatedly expressed their dissatisfaction at how the club is being run during Saturday’s game, chanting for the Glazers to step aside as owners.

Executive vice-chairman Ed Woodward was also targeted as frustration over United’s current status once again bubbled to the surface.

Despite the off-field shenanigans, United’s players produced a dominant display against the Canaries and will be eager to repeat the trick at Anfield.

The Red Devils are the only team to take a point off Liverpool this season and they were certainly a shade unfortunate not to win the reverse fixture back in October.

Marcus Rashford gave United the lead in that game and it wasn’t until the 85th minute that Adam Lallana managed to draw Liverpool level.

Rashford has remained in good goalscoring form since then, with his double against Norwich taking his tally to 14 in the league this term.

He now has 19 in all competitions, his biggest total since his debut in 2015, and he is undoubtedly United’s main goalscoring hope this weekend.

Despite Liverpool’s improvement over the past few seasons, their recent record against United has not been great.

They have won just two of their last 13 meetings in all competitions to highlight that fixtures against their biggest rivals are never easy.

With United chasing a top four place they are sure to be fired up and it would be no surprise to see them take something from the game this weekend.