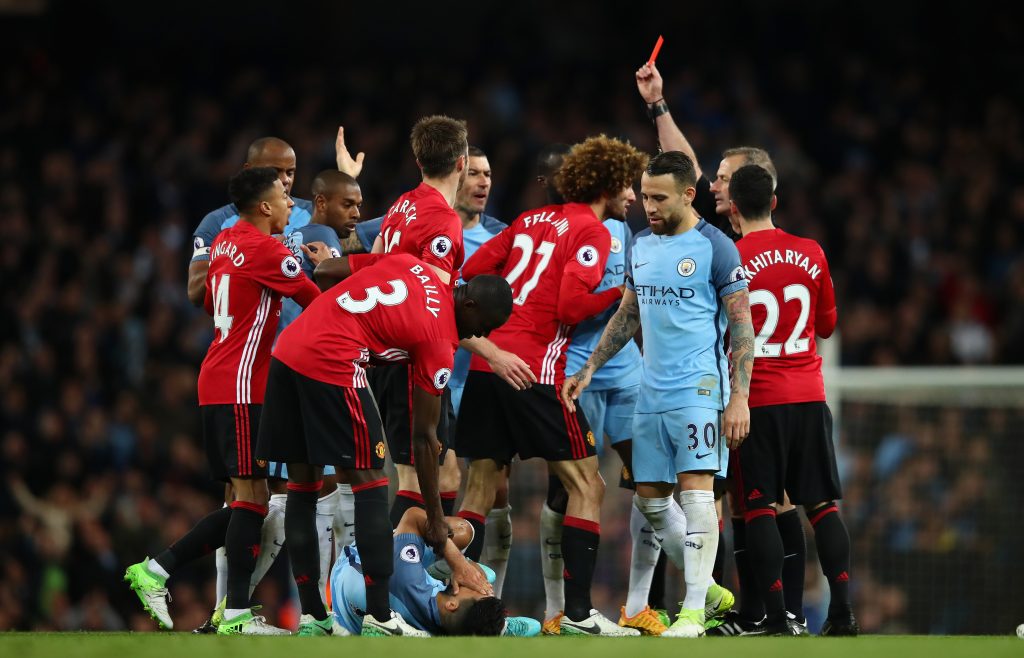 After the two Manchester clubs fought to a stalemate at the Etihad Stadium on Thursday night, you could be forgiven for feeling a sense of deja vu. In contrast to the old cliché, you almost certainly could have written this script before kick-off; a dominant home performance from City that lacked a cutting edge, Mourinho’s team playing to avoid a loss even though they needed a win and Marouane Fellaini losing his temper. The biggest surprise was that this time Fellaini didn’t get away with it.

Realistically, City only needed to avoid a loss against United to help eat up the remaining games in the race for the top four. With David Silva injured, De Bruyne carried the creative responsibility for the team and once again proved his worth with 5 key passes in the game. Sergio Aguero, however, seemed to lost his composure after hitting the post with the first of these chances and his confidence deteriorated as the game went on. He struck 8 shots after this, 5 of which were off target. It was like introducing your mate to a supermodel only to overhear him say, “Do you come here often?”. God loves a trier.

Credit to Gabriel Jesus, who almost picked up where he left off before his injury, scoring what would have been the winner but for some eagle-eyed officiating.

United never looked like winning the match but again produced a clean sheet. Considering Rojo, Jones and Smalling were all injured, this was some achievement even for the second-best defence in the league. Having last been in the top four on September 15th though, it’s hard to see them putting together the sort of run that would usurp Liverpool or City at this late stage. Come the 18th of May though, Mourinho may have to content himself with a League Cup and the knowledge that he has made the United players happy.

The Good, the Bad and the Ugly

One surmises that Mourinho will be more disappointed with Fellaini almost costing United a point rather than preventing them from winning the game. In typical Fellaini fashion, he wisely brought down Aguero to protect his back four only to immediately and unnecessarily foul him a second time. The subsequent headbutt and straight red was just the icing on the cake.

Although City fans would be disappointed not to have snatched a win at the death, they can at least console themselves in the loss of Claudio Bravo to a calf strain. Bravo was his effervescent self, stretching for Anthony Martial’s cross thus palming it away from Aleksandar Kolarov and almost into the path of the waiting Ander Herrera. With news of Joey Barton’s ban for betting against his own team, one wonders if the FA should be looking at some of Bravo’s performances for City.

In truth, City always looked the more likely of the two teams to win the match and although they are missing Silva with Aguero out-of-sorts, the pairing of De Bruyne and Jesus should scare De beJesus out of Middlesborough on Saturday.