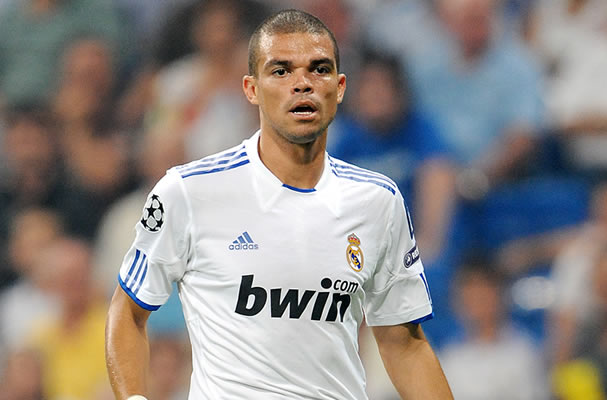 Portuguese international defender Pepe has been attracting interest from Premier League runners-up Manchester City. The Sky Blues are said to be preparing a potential £25M bid to procure his signature.

Last season, Pepe lost his starting place with the La Liga side to summer signing Raphael Varane. He made 28 appearances in the league, but failed to feature in any capacity for the side’s last four games. He fell out with former manager Jose Mourinho, and is reportedly seeking an exit.

He’s said to be keen on a change of scenery and Manchester City are eyeing him up to be a potential short-term partner for Vincent Kompany to take the pressure off Matija Nastasic. The Citizens are desperate to win the Premier League title back from the hands of their fierce rivals Manchester United, and regard Pepe’s vast amounts of experience as crucial to their chances.

There has been no official word from the Real Madrid camp to suggest they will let Pepe go for just any price, so the two sides will be undergoing negotiations in the coming week.

With Man City failing to impress in the Champions League in their last two seasons, manager Manuel Pellegrini wants to recruit a side with vast amounts of Champions League experience to make them contenders to go all the way.

With Pepe’s potential arrival, the future of out-of-favour centre back Joleon Lescott is uncertain. Close sources have suggested the England international could still be offered a contract extension, but there is no word from the camp.