Manchester City and its players are completely dominating the Premier League 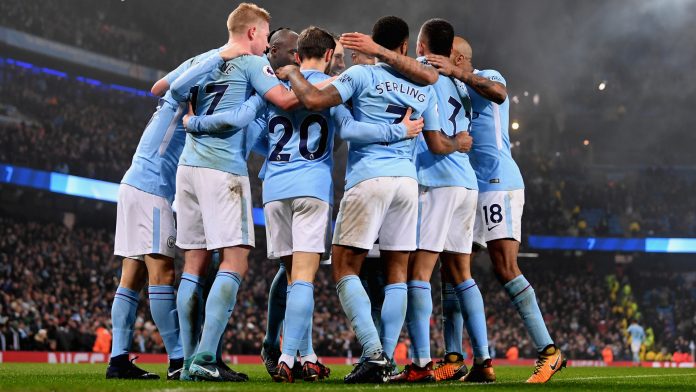 Manchester City has just broken the streak for most consecutive wins ever by a club. They have won 15 straight games dating back to August. Which player has carried the club during this unbelievable win streak?  Trick question. None of them. 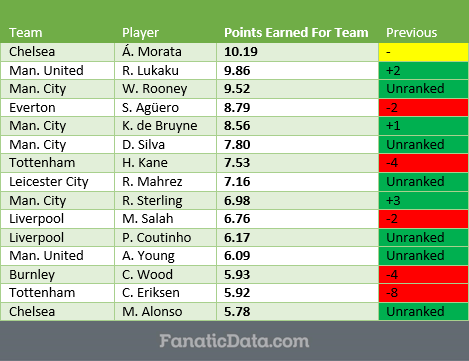 As the Most Valuable Offensive Players (MVOP) rankings show, 4 Manchester City players sit in the top 10 of the rankings. There is less than a 2 point difference between Sergio Agüero (4th place) and Raheem Sterling (in 9th place), which is hardly a difference at all. Every matchday, it seems a new hero emerges for the club.

It seems, at this point in the season, Manchester City is only racing with itself. They are 11 points ahead in the table. Only a colossal streak of poor performances can derail their early success. But with so many different players coming up with clutch performances for the club, such a drop in performance seems unlikely.

While Wayne Rooney’s professional career began at Everton, his name will forever be acknowledged alongside Manchester United. After 13 seasons at Man. United, it seemed Rooney might be heading for an early retirement when he left for Everton this past summer. Despite only being 31 at the time, it felt Rooney’s better days were past him.

But a new-found energy has Rooney surging in the Most Valuable Offensive Players (MVOP) rankings, despite an average performance from Everton this season. In fact, Rooney has accounted for 38% of the club’s total points this season. Without Rooney’s support, Everton would have been in 17th place in the EPL with only 15 points earned. If anything, Rooney has proven that he still has much more to give to his side and to football in general.

Moving past Rooney, Chelsea’s Álvaro Morata continues to lead the MVOP rankings, and continues to be a solid acquisition for Chelsea.  Another solid acquisition has been Romelu Lukaku for Man. United. He currently sits in 2nd place in the MVOP rankings with a little under 10 points earned for his side. It is also interesting to note that 6 players, including Rooney, entered the rankings, after being unranked in the previous rankings after Matchday 12.

Nothing has changed since the beginning of the season as the 4-2-3-1 formation continues to be the most popular formation used by EPL teams. Using that formation, we have laid out the Most Valuable Starting Squad in the EPL (excluding goalies). 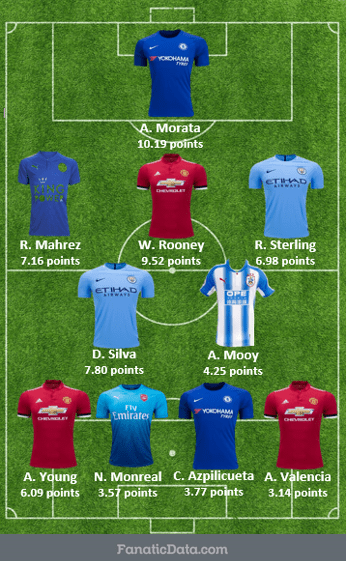 There has only been one player to appear in every Most Valuable Starting Squad since the beginning of the season.  That player is Huddersfield midfielder Aaron Mooy. Not the likeliest of candidates to hold on to that title, but a symbol of consistency throughout the season nevertheless.

While Manchester City has 4 players in the MVOP rankings, only two of their players made it into the Most Valuable Starting Squad. The club with the most players in the starting squad is Man. United with 3 players representing them.

Get an update for the rankings and starting squad after Matchday 22!