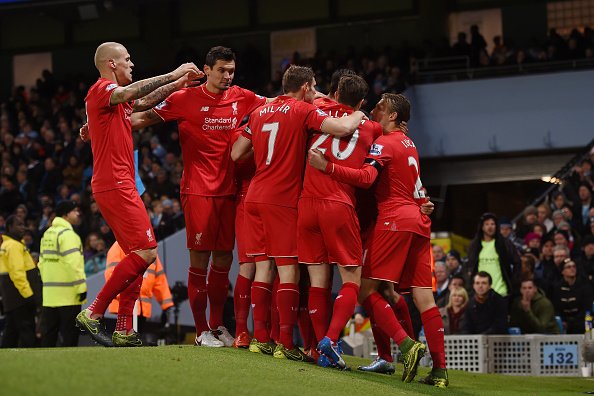 Jurgen Klopp has helped Liverpool mastermind a 4-1 victory over Manchester City in the Premier League clash at the Etihad on Saturday.

The outcome was more or less decided before the end of the half-time as four goals were scored, out of which three went in the Merseyside club’s favour. The Reds first choice strikers Christian Benteke and Daniel Sturridge were not in the playing XI and the German manager started summer signing Roberto Firmino as the main striker.

Eliaquim Mangala’s own goals helped the Reds to open the scoring, followed by goals from the Brazil international duo of Philippe Coutinho and Firmino. Sergio Aguero pulled one back for Manuel Pellegrini’s side before the break.

Things did not change in the second half, until a brilliant strike from defender Martin Skrtel saw Liverpool score their fourth goal of the evening.

Raheem Sterling played his former club for the first time since leaving Anfield in the summer and the England international hardly had any impact in the match.

Here is how Twitter reacted after Klopp made his mark with a 4-1 win over City.

#MCFC fans streaming for the exits as #LFC fans dance in the stands. Astonishing result. pic.twitter.com/bqhqwryhyE

Stunning demolition job from Klopp's #LFC. Biggest away win over Man City since 1989. Only Hart saved City from a bigger pummelling

Was out working on a feature story, but sounds like I missed a dominant performance from #lfc at #mcfc. 1-4 is a huge scoreline.

This is just so typical of #Liverpool. Beat #Chelsea, kill #MCFC and still somehow manage to lose against #CrystalPalace. #LFCVMCFC #LFC