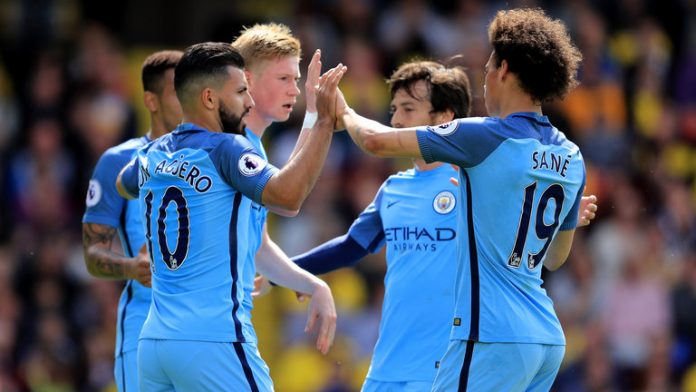 Gary Neville has questioned whether Manchester City can maintain their current form during the winter months.

City have dropped just two points this season and lead the Premier League by five points from Manchester United.

Despite their excellent start to the campaign the former United star believes City face some tough challenges over the next few months.

“They are at an outstandingly high level,” he told Sky Sports.

“They can only stop themselves. I mention the words robustness and resilience.

“I look at the winter months and it seems like an old cliche – can you go away to Stoke and that sort of garbage – but there’s a little bit more to it than that.

“If you look at Manchester City’s last two seasons, one under Manuel Pellegrini and one under Guardiola, and you look at November, December and January.

“They probably would have won two titles in those two seasons if they’d have maintained their championship-winning level.

“If they drop to that level in November, December and January again then they’ll be in trouble. Those months are tough, the toughest months, I don’t care what anybody says.

“It’s the toughest months to play football – the games, the weather, the injuries, the stockpile of fixtures, the Champions League, the Christmas period.

“Can they get through to February, March and April when the weather gets better again and it’s an easier time of year to play football?”

December looks particularly difficult for City, with the club facing nine games over the course of the month.

That run includes league games against United and Tottenham Hotspur and Neville thinks it’s a period that could make or break City’s season.

“Pep Guardiola will know what’s cost the team in the last two seasons,” he added.

“He’ll know it’s the November, December and January runs – and they are coming into that now.

“The test is to come, but at the moment they are reaching a level which is quite incredible and brilliant to watch.”