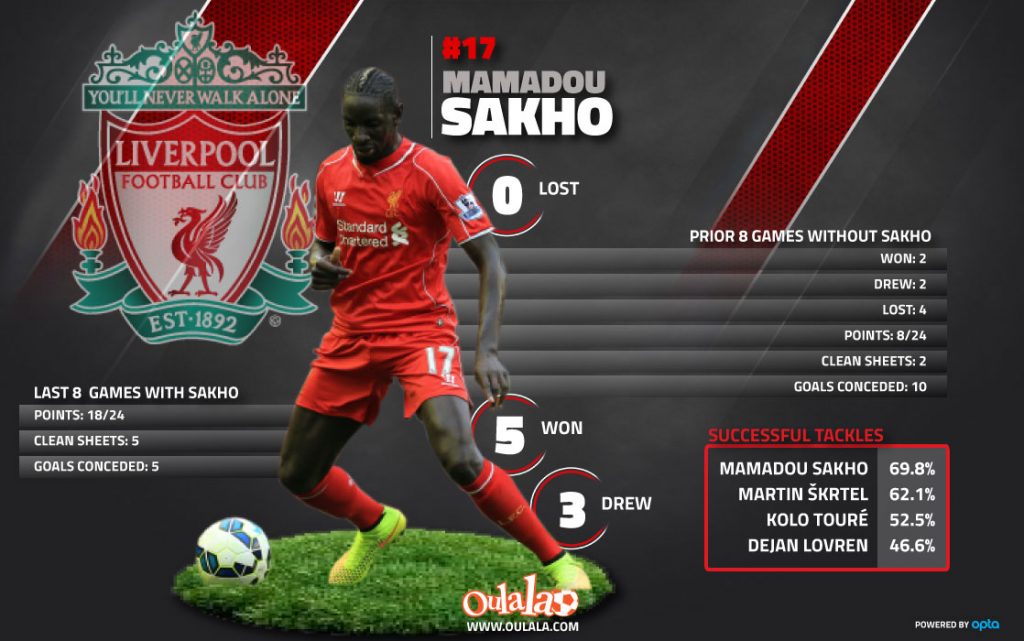 Liverpool are on an eight game unbeaten run in the Premier League which is coincided by one players return to the team, defender Mamadou Sakho. Could this be coincidence? Opta powered fantasy football game Oulala have taken a closer look at the facts which suggest that Liverpool’s recent upturn in form is down to one man.

After losing to rivals Manchester United at Old Trafford 3-0 in December it was Liverpool’s fourth defeat in their previous 8 games. In fact the team had only won 2 of those 8 games, drawing the other 2. The side shipped 10 goals (a rate of 1.25 goals per game) and only collected 2 clean sheets. During this period Liverpool picked up 8 points from the 24 available and sat 10th, 7 points from the top 4.

Enter Mamadou Sakho. Brendan Rodgers reinstated the Frenchman in Liverpool’s following crunch game at Anfield against Arsenal which ended 2-2. Since then the side has enjoyed an excellent run of form in the Premier League collecting a total of 18 points from 24. In their last 8 games after Sakho’s return to the team Liverpool have collected 5 wins, 3 draws and are unbeaten in the Premier League. They’ve collected 5 clean sheets and have only conceded 5 goals (a rate of 0.63 goals per game). Liverpool have jumped up to seventh and are now 5 points adrift of the top 4.

Looking at tackling we see yet further evidence of Sakho’s positive influence. This season he leads his fellow centre-backs for successful tackles. With an excellent rate of 69.8% the Frenchman is outperforming Martin Škrtel (62.1%), Kolo Touré (52.5%) and Dejan Lovren (46.6%).

The stats prove just how instrumental Sakho’s return to the side has been to their upturn in form. Next up for the defender is a battle against Spurs in-form striker Harry Kane, the man that has destroyed both Arsenal and Chelsea single-handed.