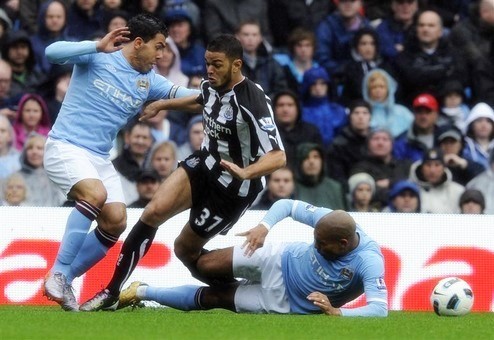 Dutch national coach Bert van Marwijk has made a huge statement with his decision to leave Manchester City’s Nigel De Jong out of his squad to face Moldova and Sweden for the upcoming international games.

In the wake of this summer’s World Cup final, where the Netherlands picked up 9 yellow cards and one red card in a feisty affair against conquerors Spain, van Marwijk has moved to show that he does in fact feel a responsibility towards the way his players carry themselves on the field of play.

De Jong was a mainstay of van Marwijk’s World Cup side yet the boss has had the courage to deny his unruly performer a spot amongst the latest Dutch elite, insisting he must speak to the midfield combatant about his attitude.

The tackle that left Newcastle’s exciting young winger Hatem Ben Arfa with a double leg break was described by the Oranje’s commander-in-chief as a ‘wild and unnecessary offence’ and the Dutch coach has taken the bold decision to make City’s tough tackling enforcer accountable for his actions regardless of the handicap placed upon his team.

Sunday’s crunching blow was not the first time De Jong has coveted controversy on the pitch. In March, Bolton’s Stuart Holden missed 6 weeks of action after the USA midfielder emerged from an encounter with the Dutch bruiser nursing a broken leg.

Then of course, there was the chest high drop kick De Jong delivered to Xabi Alonso during July’s show piece final.

The Dutch coach has now deemed enough to be enough, stating that he has “a problem with the way Nigel needlessly looks to push the limit”.

This time, there is no doubt the tackle by De Jong was firm and exuberant even if there is some contrasting opinion as to its legitimacy. Many fans would condemn the tackle as a true stinker, mirroring van Marwijk’s reaction. Others suggest that as robust as it was, De Jong won the ball cleanly and only caught Ben Arfa with his trailing leg.

Regardless of this as an isolated incident, it is clear that De Jong’s style regularly puts player’s safety in danger as he struggles to find the balance between competitiveness and recklessness. Consequently, it is encouraging to see a manager take responsibility for trying to nurture his player and look after his development.

Footballers can have a tendency to let their egos take charge and if they are not forced to reflect on their repeated transgressions we cannot expect a change in behavior. The authority figures in the game have a responsibility to ensure players are being brought up in the right way.

If referee Mike Riley had delivered a red card to Ashley Cole on that infamous occasion when Cole petulantly turned his back on the official at White Hart Lane, he would have done the Chelsea full back a greater service (and himself for that matter) than he did by leaving him on the pitch.

And there is hope yet that Joey Barton’s attitude may finally be taking a turn for the better thanks to the constant scrutiny cast upon his behavior under the spotlight of a watching Premier League.

Whilst it is important that the football world helps to define sensible boundaries that enable players to express themselves freely, it is equally important that the same jury does not chastise challenges based on the outcome rather than the incident.

Deciding whether the challenge on Ben Arfa was legitimate or illegitimate should not be determined by the fact the player suffered a terrible injury. If a challenge is inappropriate or excessive, a player should be made to reflect irrespective of whether injury is unstained, as Karl Henry has been made to do following his red card at the DW Stadium this weekend.

Yet we have seen a couple of leg breaks in the Premier League this year which were as a result of clumsy, not malicious, tackles. It is unfortunate for both Adlene Guedioura of Wolves and Fulham’s Bobby Zamora that they have to spend an extended spell on the sidelines, but neither of the challenges that did for these players were x-rated and the offending players involved should not be ostracized as a result.

We need to remain aware that we are part of a competitive and physical sport that is played at a stirring pace and sometimes the most horrific injuries can occur as a consequence of completely innocuous challenges. Just ask David Busst.

Consequently, we should not get into the habit of calling for players to be unduly punished every time a challenge results in an injury. Football is a tough sport and nobody, except maybe Arsene Wenger, wants to see the art of tackling eradicated from the game.

Everybody warms to a fully committed, hard tackling midfield general, but we do not want to lose great talents of the game to needlessly reckless behavior. De Jong needs to be made to think about his actions in order to learn where to draw the line between committed and reckless in the future.

By making De Jong accountable for his actions, Bert van Marwijk may well help him to learn where that line starts and ends and maybe even make him a better footballer. It is a poignant and selfless gesture for the greater good of the game.