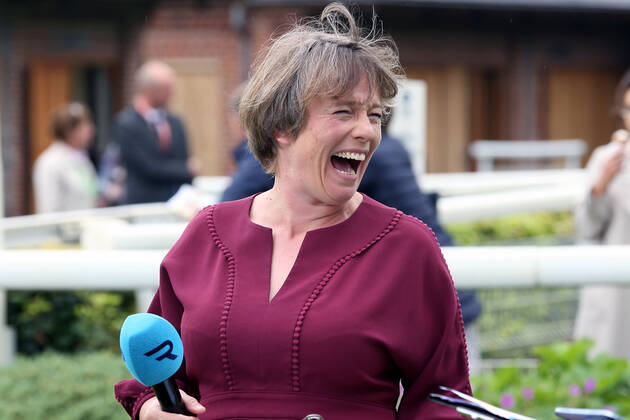 Racing TV’s Road to Cheltenham presenter Lydia Hislop has been covering the Festival for many years. On that weekly show throughout most of the core jumps season, there are plenty of betting tips on offer.

That is why Hislop was part of the Cheltenham Festival Paddy Power preview night on Monday, 7 March. She gave her fancies as part of an expert panel of industry insiders. These are the Lydia Hislop tips for this year’s edition of the big National Hunt meeting.

“Telmesomethinggirl will win the Mares Hurdle,” Hislop said. “Stormy Ireland may face more horses with fight in them in the closing stages here.” Telmesomethinggirl won the Dawn Run Mares Novices Hurdle on the more testing New course over 2m 1f here 12 months ago. She shaped like the return to this track and trip will suit, especially off level weights. Telmesomethinggirl is 11/4 with William Hill to complete this Cheltenham double.

Bet on Telmesomethinggirl in the Mares Hurdle with William Hill

“Nube Negra could well finish second,” Lydia Hislop said. “He would’ve won with a clear run and a stronger pace in the race last year.” An impressive winner of the Shloer Chase over the same course and distance in November, Spanish-bred Nube Negra is available at double figure Queen Mother Champion Chase odds of 10/1 with Hills.

“I’m looking for something to fall into second behind Allaho, and Eldorado Allen looks in better form this season,” Lydia Hislop told the panel. Winner of the Denman Chase over further at Newbury on his last start, that was a career best. Eldorado Allen, who was second in the Arkle at a big price 12 months ago, is 12/1 with William Hill in the Ryanair Chase.

“I’ve backed Klassical Dream,” Lydia Hislop admitted. “At his very best, he is the best horse in the race. He will either win or completely blow out.” Winner of the Supreme Novices Hurdle in 2019, Klassical Dream landed Grade 1s at the Punchestown Festival last spring and at Leopardstown this Christmas. He is 5/1 in the Stayers Hurdle odds  at Hills to win at Cheltenham for the second time.

Back Klassical Dream in the Stayers Hurdle with William Hill

“I think Dinoblue is mustard,” Hislop declared to the panel. “Willie Mullins has put her away and laid her out for this. She can only improve for Clonmel.” The Cheltenham Festival NAP in Lydia Hislop tips is the once-raced JP McManus owned Dinoblue. William Hill are 11/4 about this exciting prospect going in again here.

Bet on Dinoblue in the Dawn Run with William Hill

“I like Galvin but he is on the short side now, so it’s Minella Indo I fancy at the prices,” Lydia Hislop said. Despite winning the blue riband event of steeplechases 12 months ago, Henry De Bromhead’s runner has Gold Cup odds of 5/1 with William Hill. That makes Minella Indo third-favourite behind stable companion A Plus Tard and Galvin.

Back Minella Indo in the Cheltenham Gold Cup with William Hill

After reading the Lydia Hislop tips for Cheltenham, there is plenty more Festival content to keep punters interested: