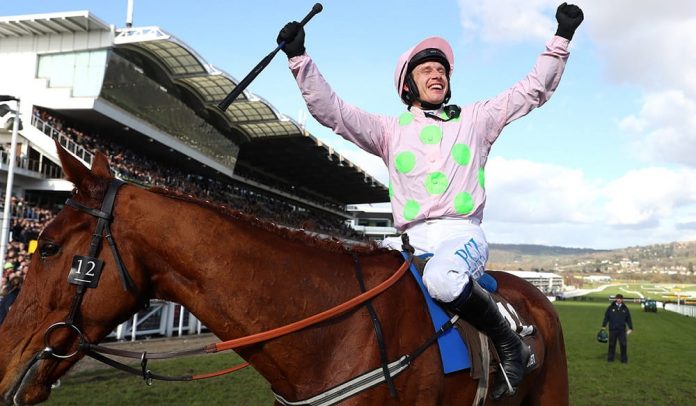 There is a strong Irish flavour to the Cheltenham top jockey odds in 2022. Seven of the last eight leading riders at the Festival were based in the Emerald Isle, so it’s not just the best horses over there.

Since Ruby Walsh won the last of his 11 top jockey crowns at the meeting in 2017, four different riders scooped the honours. Success at Cheltenham in this particular market on horse racing betting sites is about quality over quantity. In this sense, one win isn’t more valuable than any other. It’s about who rides the most first past the post.

The number of seconds, thirds and even fourths can be used as tiebreakers on countback if necessary. That is how bookies usually decide who to pay out on as winners from their Cheltenham top jockey odds rather than use dead heat rules. During the Festival, the leading rider at the time has a distinctive armband on. This helps punters identify the top jockey in a race.

This market, unlike other Cheltenham betting opportunities, is about the meeting as a whole. It’s a marathon, not a sprint. A rider can’t win this award on the opening day of the Festival but they can certainly lose it if fancied runners fail to deliver. We asked the SportsLens horse racing experts for their thoughts on the 2022 Cheltenham top jockey odds and tips. Read on for their analysis:

The leading Festival jockey in 2020, Paul Townend missed out on a successful defence of that crown last season. Some key reverses proved costly for the successor to Ruby Walsh as Willie Mullins’ number one stable jockey. Concertista‘s head defeat in the Mares Hurdle was one that got away. She may make amends in the Mares Chase.

Two outside rides for Rachael Blackmore that could’ve been Townend aboard instead played their part in his defeat too. Champion Bumper hero Sir Gerhard and Allaho were mounts he could’ve ridden but Mullins put him on Kilcruit and he stayed loyal to Min in the Ryanair Chase. An 80/1 rank outsider with online bookmakers denied Saint Sam in the Fred Winter too.

These are fine margins but Townend may have better luck at the Festival this time around. His potential book of rides includes the two noted above that he wasn’t on last season. Sir Gerhard is an exciting novice hurdler with options now, while Allaho remains all the rage to become just the second horse to win the Ryanair Chase more than once.

Mullins has a strong hand in the Arkle betting with Blue Lord heading potential hopes. Stormy Ireland has a new lease of life since returning to Closutton, meanwhile, so based on her ready Relkeel success against geldings, could be a big player in the Mares Hurdle that Mullins has farmed down the years.

Townend could end up having a great start to the Festival with up to four potential winners on the opening day if Supreme scorer Appreciate It sprung a Champion Hurdle surprise. Sir Gerhard may run on Ladies Day instead, however, with Mullins mulling over keeping him separate from Dysart Dynamo. Martin pipe winner Galopin Des Champs is a strong fancy at the head of the Brown Advisory Novices Chase market.

Energumene has obvious claims in the Champion Chase too. Later on at the Festival, Townend’s chances look fewer on paper. Mullins doesn’t have a Gold Cup contender apart from veteran Al Boum Photo as injury ruled Monkfish out for the season. The fourth and final day of Cheltenham may be a quiet one for Townend, then, so he needs to make Stayers Hurdle odds favourite Klassical Dream count.

Mullins will have something for the Dawn Run Mares Novices Hurdle, also on St Patrick’s Thursday. Townend may have to choose between Allegorie de Vassy, Brandy Love, Grangee and Statuaire. If all goes well, then, he could have the leading rider honours sewn up before Gold Cup day. That is why it’s so surprising that Virgin Bet are Evens about Townend in their Cheltenham top jockey odds this year.

Blackmore popular with punters but tough to triumph again

Defending champ Rachael Blackmore won the leading Festival rider award on outside rides. Mullins may be less inclined to give her those opportunities at Cheltenham this time. Henry De Bromhead’s stable scooped three of the big five open championship races in 2021 but Blackmore piloted one of those to victory. That was Honeysuckle, who will be her banker again this year.

Try as punters might to find an alternative in the Champion Hurdle odds, there just isn’t any opposing the mare for victory. Where are Blackmore’s other successes coming from? It will probably take at least matching her five Cheltenham Festival winners from last term to take the title again. Journey With Me is a contender for the Ballymore Novices Hurdle.

Fellow Robcour owned horse Bob Olinger is a hot favourite for the Turners Novices Chase on the third day of the meeting, meanwhile. Telmesomethinggirl is also up there for the Mares Hurdle but hasn’t won since. If Blackmore wants to be leading rider at the Festival again, she has to snatch victories from Townend and others when the market doesn’t expect it.

Her choice of mount in the blue riband event could effect Gold Cup odds, meanwhile. Last year, riding A Plus Tard was the wrong call as Minella Indo triumphed under Jack Kennedy. Both have been beaten since, disappointing over Christmas in the Savills Chase and King George respectively. While Blackmore will be the popular choice, her 4/1 price with LiveScore Bet is plenty short enough.

Gordon Elliott served a ban during last year’s Festival. If factoring in the horses moved away from Cullentra House by outraged owners and those trained during his suspension by Denise Foster, though, he would’ve been the top handler. Long-time ally Davy Russell often turns it on at Cheltenham, so smart money may go down on him.

The only concern with backing Russell is that the Elliott yard’s top hoses often end up split between him and Jack Kennedy. There are big calls to make over who rides Cheltenham Gold Cup contender Galvin, for example. Elliott is a shrewd operator, especially in the handicaps on the Cheltenham Festival schedule but how many he can win remains to be seen.

Russell was leading rider at the meeting in 2018. With the likes of Walsh, Richard Johnson and Barry Geraghty now all retired, he is the elder statesman of the weighing room. At 6/1 in the Cheltenham top jockey odds, Russell is shorter than both Kennedy (10/1) and Nico de Boinville (14/1) – the only British rider with any sort of chance on paper.

Interested in the Cheltenham Festival? Read up on it: