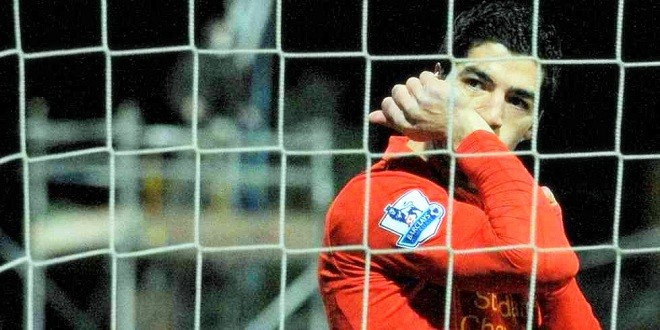 The Uruguay international has been widely respected for his genius ability with the ball but at the same time he has been treated as English football’s pantomime villain for some of his unsporting actions.

The talisman forward in an interview with Fox Sports, aired in Argentina, suggested that English press love to cook stories about him while admitted that he deliberately dived against Stoke City in an attempt to earn victory for the Reds at Anfield.

Suarez scored the winning goal against Mansfield Town in the FA Cup where the ball clearly touched his hand before rolling on to the net. The referee didn’t spot the incident while the goal stood.

While he was absolutely right in celebrating the goal (kissing his wrist which he usually does as a sign of love gesture to his daughter) with his teammates, the former Ajax star was censured in the press for his unsporting behaviour.

Drawing to that incident the Uruguayan said as quoted in the press:

“Now I know that Suárez sells. The other day, I committed a handball unintentionally, without thinking it would be a goal.

“And then, because I kissed my wrist after I had scored, they criticised me.

“I wish they would dedicate themselves to talking about football and not the attitude of each player.

“United manage the press a lot here, they have a lot of power and they are always going to help them.

“Sometimes, on the pitch, you get reactions like: ‘What the hell did he do?’ I know I was criticised for throwing myself over against Stoke [earlier this season].

“On that occasion, I did throw myself down.”

Suarez had contravened explicit orders from Liverpool hierarchies in the past when he pleaded his innocence about the racism saga involving Patrice Evra in an interview and this candid remark of media’s inordinate bias towards everything Manchester United will inevitably attract more attention.

However, Suarez indirectly echoed Liverpool skipper Steven Gerrard’s opinion about the club’s transfer policy that over emphasis of buying young players at all cost is flawed, especially when the targets and ambitions are as high as competing for silverware.