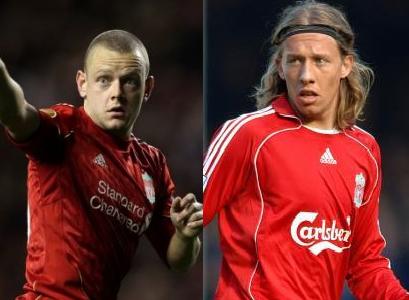 No, Liverpool are not going to make the Champions League this season.

That said, it’s nice being a Liverpool fan at the moment. Goals are being rattled in, games we would usually struggle in being won, and every, single player is playing well, whether starlet or veteran. Good football is being played and we’ve rarely looked more solid under our previous two, arguably more defensive managers. And everyone has had their part to play. But let me just single two players out. The clue as to who is in the title.

Yes, if someone had suggested that Jay Spearing, a 22 year old academy graduate and Lucas, arguably one of the most maligned midfielders in the Premier League over recent years, would serve as the base for Liverpool’s recent devastating displays very few would have believed you, but lo and behold, that is exactly what they have done, which few would have foreseen.

Yes, Lucas and Spearing are both very committed players who work their socks off. Yes both have high retention of the ball but the accusation could have been fired at both of them that they lacked creativity – that as a midfield pairing they didn’t offer the spark or play making ability that was needed. Luckily, we can argue that this was a flawed argument before the partnership even began to blossom.

Tackling is NOT Negative

Tackling, winning the ball back high up the pitch is what separates the devastating force that are Barcelona under Guardiola that win the ball back with ferocious intensity, to the Rijkaard Barcelona which was still lovely but lacked the bite to win more then they did. Tackling high up the pitch is far more creative then say, being forced back because your creative players aren’t able tacklers or shirk the responsibility.

Luckily for Liverpool, neither Lucas or Spearing do tend to shirk their battling responsibilities. They press, they are well positioned, they win the ball on their feet with consistency. In fact, they have won the ball 31 times between them in the past two games alone. (Love you Guardian Chalkboard!)

Of course tackling is only half the work. This is where unlocking the rest of the central pairings potential comes in.

You’ll also hear fans saying alot that their team are lacking creativity – certainly it was a component of both the Benitez and Hodgson eras. Fan’s just love creativity, predictably. Everyone wants a Fabregas or Scholes, or an Iniesta. But the thing is of course is that players don’t just have creativity – it can be brought out of a player through simple tinkering of the team. And of course, bringing in players who can inflict real damage with service.

Enter the quite brilliant emergency goalkeeper Luis Suarez. Fabregas works because he has the likes of Walcott and Nasri and Arshavin to feed, who make great movements to open up space. Scholes works because he can find any of Man United’s outrageous attacking talents with his passing. Liverpool’s new central pairing function because the movement in front of them has suddenly, improved by light years. Suarez never stops moving. Kuyt’s best asset is his movement in between the lines, and Maxi always was excellent off the ball.

Now say that Lucas and Spearing don’t have creativity – Liverpool have slaughtered Newcastle, Birmingham and Fulham in their last three games, putting past them an average of four goals each. The entire team suddenly has verve and style – and they arguably have the unlocked ability of Lucas and Spearing to thank for that. Possibly, they have their team mates to thank too.

The Base Camp Bit

Of course, a lot of it is to do with the tactics being employed. Spearing and Lucas are no attacking midfielders in spite of their passing and tackling abilities – they are central or defensive midfielders. They join in on the occasional attack but they are no Van Der Vaart amalgamation. What they do is fill a devised role, and they do it excellently.

Dalglish has built a system around the lower spine of the team – with Carragher and Skrtel keeping things tight at the back (Love you Steve Clark) and Spearing and Lucas essentially controlling the middle of the park against all and sundry, the likes of Miereles, Suarez, Kuyt and Maxi had a platform from which to attack in whichever way they like. Suarez is regularly swapping sides of the pitch, Maxi scored his first two goals from opposite sides of the penalty area against Fulham (Not to mention the screamer of a hat-trick completer, from the centre of the pitch) and Kuyt is Kuyt.

The attacking players and even Johnson, Flanagan and others can play off this box of a spine with the security of the reliable passing Spearing and Lucas provide, and their tackling and pressing that ensures attackers rarely if ever have it easy attacking Liverpool in return. And balance of Liverpool’s central pairing, the understanding that they have and their similar and at the same time complementing qualities, are the catalyst for Liverpool’s form as much as Liverpool’s other players are the catalyst for theirs.

Carrying and Playing the Piano

It almost seems amazing that they, and Lucas especially, were once seen as terrible players by many. I think perhaps that people alot these days want to see world class players in every single position, especially for those teams which want the title.

But then, Man United are on the very edge of winning the title, with what is arguably their worst squad for years (I use worst very, very loosely.) Where Madrid have fallen flat on their arse and Man City are only slightly improved from last year for their splashing of cash.