At the beginning of the season, all eyes were on the hot seat at Manchester United. A turbulent 2013-14 season had seen the Red Devils go from Champions to 7th-placed finishers in less than a year. David Moyes had tried and failed miserably in succeeding Sir Alex Ferguson, and everyone was keen to see who would be appointed next to carry forward the latter’s legacy.

The job fell to one of the most experienced managers in European football – Louis Van Gaal. The Dutchman, who managed his home country to a 3rd-placed finish at the recent World Cup in Brazil, had a long and illustrious history, having won league titles in 3 different countries, along with a Champions League crown with Ajax back in 1995. In charisma and personality, he matched Sir Alex stride for stride, and the fans believed that at last they had found the perfect successor to the legendary Scot.

A distinguishing feature of Van Gaal’s philosophy has been the 3-5-2 formation. He has always preferred this setup, wherever he has managed, and its introduction to the Premier League was a big talking point before the start of the season. It worked well enough in pre-season, and anticipation was high to see how it would function come the season-proper.

Van Gaal though, was in for a rude shock. Winless in his opening four games in all competitions, the 3-5-2 brought forth more problems than solutions for the Red Devils. Now, less than a month into the season, the most-talked-about strategy of the season is gone.

On Sunday, Van Gaal adopted the more customary 4-4-2 formation, as United picked up a comfortable 4-0 against Queens Park Rangers.

The 3-5-2 formation is designed to play against teams with 2 strikers. Two centre-halves mark the top opposing forwards, while the third centre-half, more commonly known as the ‘sweeper’ or the ‘libero’, provides cover if one of his partners were to be beaten. Against a side playing a 4-4-2 formation, the most widely employed setup till a decade ago, the side playing the 3-5-2 will have a man-advantage in midfield, which proves absolutely vital. The opposing full-backs, are therefore left with no one to mark. The opponent can, as a result, be caught out-of-position by a late runner into the box from midfield. 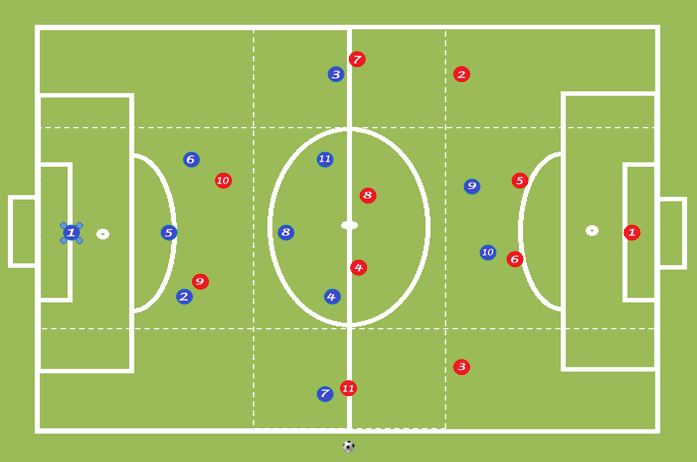 The problem with the adoption of the 3-5-2 today is that hardly any team plays with two up front. Realising the importance of an extra man in midfield, most managers have switched to some variant of the 4-5-1 system, with the 4-2-3-1 being the most popular one. This therefore, leaves 2 of the 3 centre-halves with practically no one to mark. With the popularity of the sweeper-keeper growing, the need for an outfield sweeper hardly exists anymore.

For the 3-5-2 to succeed, players with extremely specialised abilities are required. It is imperative for a  centre-half in this position to be good on the ball, as he will be needed to pick the ball up in different areas in the backline. Also, the wing-back position is one that requires extreme expertise and discipline. The aim of this system is to convert itself into a 5-3-2 while defending, so as to provide extra-security against opposition attacks.

United do not have the kind of players needed to execute this system effectively. The likes of Ashley Young and Adnan Januzaj at the wing-back positions are always going to be exposed when asked to defend.

The Dutch reached the last 4 of the World Cup recently using this system, but there was a sizeable difference in the quality of players in that team.

Not Suited To United:

United have traditionally always been a 4-4-2 side. Therefore, when Van Gaal walked in advocating the 3-5-2 system, it was nearly unheard of for most people at the club. It would therefore, take a long time for them to adapt.

Van Gaal though, has seemingly realised that it was best to revert to the original setup to get the best out of his squad, and he wasn’t wrong as United put in a stellar performance to gain their first 3 points of the season.

It will now be interesting to see what formation the Dutchman uses for the next few games. He admitted that the change was due to the unavailability of Chris Smalling and Phil Jones, but seeing his side perform so well, even the stubborn Van Gaal will think twice before changing things back.