Tottenham head into the midweek fixtures one point outside of the top four, four points ahead of Liverpool. This makes it a game Brendan Rodgers’ side really cannot afford to lose if they want to qualify for next season’s Champions League.

Both sides head into this game off the back of positive derby results at the weekend – Spurs beating Arsenal and Liverpool getting a point at Goodison Park. The pre-match betting previews tend to favour a draw in big games like these, however Tottenham are the form team and the ones to back in this game.

Brad Jones is still out with a thigh injury.

This game comes too soon for Kolo Touré who was part of the Ivory Coast side that won the African Cup of Nations in a dramatic penalty shootout on Sunday.

Rodgers has doubts over both Philippe Coutinho and Raheem Sterling whom picked up knocks over the weekend but Adam Lallana could be in line to make his return after missing the last two games.

Lucas is going to spend the next month out with a groin injury. Lazar Marković is available.

Mauricio Pochettino’s side picked up no injuries or suspensions in beating Arsenal and the Argentine manager has a full squad to pick from for a second successive match. 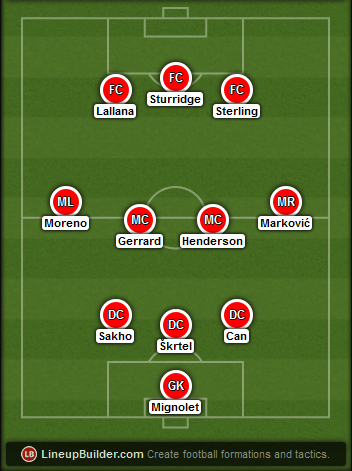 Lazar Marković comes in on the right of midfield to allow Jordan Henderson to partner Steven Gerrard in the centre of midfield in the absence of Lucas. Joe Allen is another option to Rodgers here. With Philippe Coutinho doubtful, Adam Lallana can replace him in the front three with Daniel Sturridge making his first start since 31 August – which was also versus Tottenham. 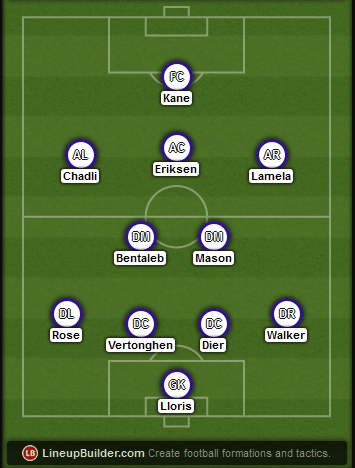 Eric Dier partnered Jan Vertonghen successfully so Mauricio Pochettino may want to stick with the same back four that limited Arsenal’s chances on Saturday. Ryan Mason covered a lot of ground and assuming he has the legs he’ll start this one again. Bringing Nacer Chadli back into the team would allow Christian Eriksen to move back into the middle.

Daniel Sturridge vs Eric Dier
He may only just be back from injury but Daniel Sturridge has been lethal since he arrived at Anfield and we wouldn’t be surprised if he returns to the starting lineup with a goal midweek. Tottenham need to pay close attention to the striker and cut off the supply the best they can, as they successfully did with Olivier Giroud at the weekend.

Harry Kane vs Martin Škrtel
The man of the hour – Harry Kane scored twice as Tottenham came from behind to beat their rivals on Saturday. That was to add to his brace versus Chelsea on New Year’s Day. Liverpool’s defence have been pretty solid of late but will need to keep close to Kane to keep him out. The young Englishman has shown his ability from outside the penalty area, inside it and in the air this season.

Christian Eriksen vs Steven Gerrard
Lucas is a big loss for Liverpool in protecting the back four. Mauricio Pochettino may find an opportunity to hurt the Reds’ back three by sticking Christian Eriksen back in the middle where Lucas won’t be. Jordan Henderson offers a lot of energy but the Dane may find success against the Liverpool skipper. He’ll have two wingers and an in-form striker to pick out.

Prediction: Liverpool 1-1 Tottenham
Tottenham have got more to lose with defeat here as it will allow Liverpool right into the top four hunt. Liverpool cannot afford defeat. We think the home team will be pushing much harder for the victory in this one but that Tottenham’s defensive and counter attack game will work well enough to come away with a point from Anfield.