Liverpool will have had less than 60 hours to recover from their penalty shoot out exit in Turkey on Thursday night when they kick off at home to the defending Premier League champions on Sunday.

A gruelling two hour game abroad on a less-than-perfect pitch, whilst Manchester City had been playing at home two days before, albeit in losing to Barcelona.

Brendan Rodgers’ side have actually picked up more points in 2015 than any other Premier League side, and are unbeaten in 10 at home to this weekend’s opponents, but face a demanding test none-the-less.

Backup goalkeeper Brad Jones continues to be sidelined by a groin injury, whilst Mamadou Sakho and Glen Johnson both remain doubts after missing the trip to Turkey during the weekend.

Steven Gerrard could make his return from injury this weekend but Lucas has been ruled out.

Philippe Coutinho will be fresh after being left back home.

Yaya Touré was suspended for Manchester City’s first leg of their UEFA Champions League tie on Tuesday so is fresh to be a commanding presence in the centre of midfield.

Manuel Pellegrini has a fully fit and available side to choose from. 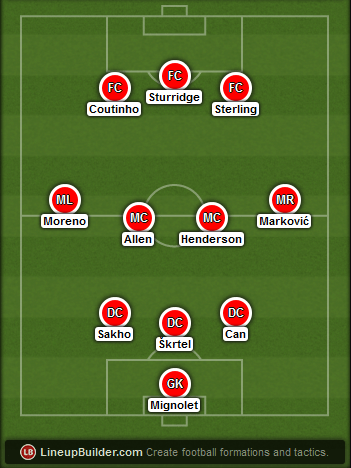 Should Mamadou Sakho have recovered, Brendan Rodgers will have his preferred back three available. Lazar Marković has played as the right wingback several times this season, whilst it will also allow Jordon Ibe to play amongst the front three. Ibe has looked a good threat when playing there in his couple of games for the Reds this season, whilst his talent is wasted a wingback and his defensive skills aren’t great. The front three should look at footage from Barcelona in the first half midweek as a way of causing the City defence problems. 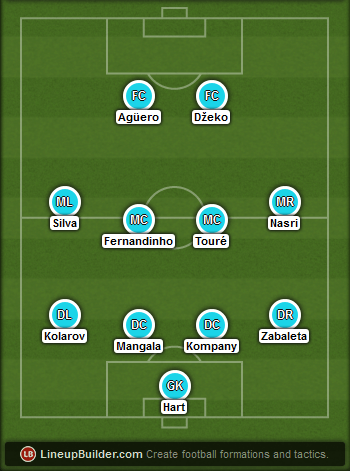 Manuel Pellegrini went with the 4-4-2 formation against both Newcastle and Barcelona and we think he’ll stick with it. Edin Džeko has got himself into good goalscoring positions in both of those games. David Silva and Samir Nasri provide good threats down the wings although not the best of cover for when Liverpool have possession going forward with the likes of Philippe Coutinho and Raheem Sterling down the wings.

Daniel Sturridge vs Eliaquim Mangala
The expensive Manchester City centre-back still looks like a liability and the front three should be looking to expose Eliaquim Mangala at Anfield on Sunday. Raheem Sterling may see some one-on-ones against him when he cuts inside but Daniel Sturridge should be up against the French international more often and the Liverpool number 15 sure has an eye for goal.

Philippe Coutinho vs Pablo Zabaleta
Jordi Alba had all the freedom in the world to set up Barcelona’s second goal midweek as right-back Pablo Zabaleta was out of sight. The Argentine also conceded a stoppage time penalty. He’s not been at his best this season and Philippe Coutinho should be looking to take advantage. The Brazilian playmaker is in fine form and will have overlapping runs from Alberto Moreno to support him in getting in dangerous positions.

Sergio Agüero vs Liverpool defence
The Liverpool defence has been playing well of late but Sergio Agüero may just have found his form over the past week with a good performance versus Newcastle and then a fine goal versus Barcelona. With David Silva and Samir Nasri creating chances out wide and Edin Džeko taking up a defender, look for Agüero to find space amongst the defence, as he does. Liverpool’s left side has looked vulnerable this season with Mamadou Sakho looking error prone and Alberto Moreno not always back.

Prediction: Liverpool 2-2 Manchester City
Both teams had bad results midweek but we see Liverpool playing an extra 30 minutes, two days later, catching up with them in the second half. Lucas is a key absence in midfield for the home side too. However, we think both attacks have the advantage in this game – Liverpool’s front three should be able to break down a Manchester City defence that has cost them a number of points this season, whilst Manchester City’s two strikers, supported by Yaya Touré, David Silva and Samir Nasri, will find the net.