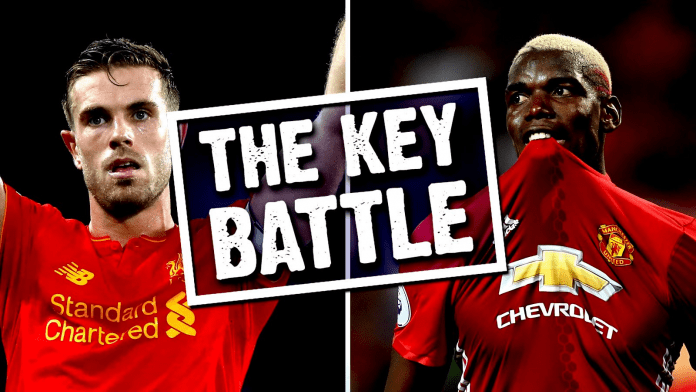 Liverpool play host to Manchester United this Monday in what will be the 197th north-west derby between the two English football giants. Both clubs are undergoing periods of transition, with Liverpool manager Jurgen Klopp set to mark his first anniversary at Anfield with a high-voltage encounter.

Jose Mourinho‘s United have had a stop-start opening to the 2016/17 campaign, and victory over their great rivals on Monday will help set their wheels into motion after a period of poor results following a good start.

While Mourinho will have a full complement of players to choose from, Klopp has a few issues with injury in midfield. With Adam Lallana and Georginio Wijnaldum running races to be fit for the game, Klopp is expected to ring the changes as Liverpool look to win their sixth game in a row.

Here are three key battles that could shape Monday night’s game and its result:

While Pogba had a fine international break as France’s heartbeat, Henderson toiled with England as Gareth Southgate‘s team struggled against Malta and Slovenia. Henderson has had a far better start to the 2016/17 season than Pogba, but United’s record signing has recently shown signs of rediscovering his best form for both club and country.

It will be an intriguing battle on the pitch, and who comes out on top could be determined by the players who play alongside Henderson and Pogba in midfield. Ander Herrera has done well in a sitting role beside Pogba, while Henderson has been content to sit deep for Liverpool with runners like Wijnaldum and Lallana flanking him.

With both Lallana and Wijnaldum not expected to be fit, it remains to be seen how Henderson goes about his job with a new set of midfield partners. United and Pogba seem to have an edge in midfield, and it will be interesting to see how Klopp patches up his line-up for the big game.

Mane has seemingly blown the roof off Anfield with his start to life at Liverpool. Three goals and three assists tell only part of the story; Mane has brought a new-found sense of excitement and optimism at the club with the ball at his feet. And on a Monday evening clash that will see Anfield roaring on every touch from the Senegalese, United left-back Daley Blind could have a tough time.

Blind has experience of being written off in the past in games where he has confounded expectations. The Dutch international might not be physically imposing or have pace to burn, but has a sense of calm about his game which could be key to douse the fire that is Mane.

Mane has scored in both Liverpool’s home matches so far, and should he maintain his good run of form at Anfield, the Reds could be well on their way to another big scalp.

Both Ibrahimovic and Matip had extended periods of rest during the recently-concluded international break, and the battle between the Swede and the Cameroonian could shape United’s fortunes.

Ibrahimovic has been the Red Devils’ top scorer this term with six goals in all competitions, while Liverpool are yet to keep a clean sheet in the league despite bringing in defensive reinforcements in the summer in the form of Matip and goalkeeper Loris Karius.

Ibrahimovic and young Marcus Rashford aside, United haven’t looked sharp in attack in recent games. On Monday against a less-than-formidable Reds defence, Mourinho‘s men would be looking to regain their knack for scoring and who better to look up to than Ibrahimovic, who has taken to English football like a duck to water.