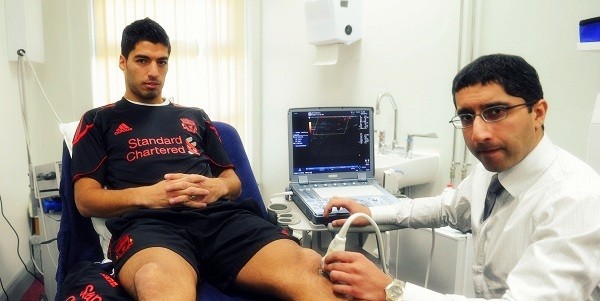 The Muslim world is observing the holy month of Ramadan as football teams across Europe begin their pre-season training sessions. This could spell disaster for a professional footballer as fasting means you eat before sunrise and stay hungry until the sunset.

Recently, former Manchester City defender, Kolo Toure, talked about how fasting in Ramadan makes mentally stronger. He’s not the only Muslim footballer in the top leagues around the world. Some of the top Muslims footballers are:

Too get an insight into how these footballers cope with intense physical training during their fasts, LiverpoolFC.com spoke to thier club doctor – also a Muslim – Zaf Iqbal.

Here’s the complete transcript of Liverpool’s Dr. Zaf Iqbal on the month of Ramadan:

Question: Please can you explain the importance of Ramadan in Islam, and what it means to you?

Zaf Iqbal: Ramadan occurs during the ninth month of the Islamic calendar and is a period of self-control and discipline. It’s where all Muslims fast between the hours of sunlight, so from dawn until sunset. It’s really a case of appreciating what you have got and it sympathises with those people who haven’t got as much as you have – so all the people that are suffering around the world, through lack of food and poverty.

For myself, personally, I’ve been observing Ramadan since the age of six. It has just become a normal part of my life at this time of the year.

Q: As a doctor, do you feel that fasting is safe and are there any circumstances where people should avoid fasting?

ZI: You have to remember that the majority of Muslims who fast do this out of choice. And at least we know that at the end of the day there is going to be food available for us. Compare this with the millions of people around the world who don’t have that choice and don’t know where their next meal is going to come from.

Q: What advice do you give to players observing Ramadan, to ensure they are healthy and hydrated during this time?

We have a nutrionist who advises them and also our sports medicine team will look at the player, look at the loading, look at the training and, with the manager, try and be as supportive as possible.

Q: What would your typical evening meal be during Ramadan?

Now I just have to look at a kebab and I gain a few kilos! So I have to be a little bit more restrained. I’ll eat grilled meat, chicken, fish, pasta and rice – so it’s much healthier in comparison to when I was under the age of 20.

Q: Many Muslims claim to either lose or gain weight during Ramadan, is this a worry with footballers – particularly during pre-season training?

ZI: It can be because the players, in general, come back for the start of pre-season not having done much training. So they may have gained a little bit of weight and we’re trying to get them fitter. And that requires putting quite a lot of stress on their bodies.

So if you combine this with fasting – an additional stress on the body – we have to really try to maintain their weight and make sure they don’t gain much fat and that they are getting the right nutrition. It is quite testing for us and the rest of the sports medicine team as well.

Q: Did Brendan Rodgers ask you to recommend training schedules for the players who are observing Ramadan?

ZI: Brendan Rodgers has been fantastic. He’s very sympathetic to individual needs and he looks at all players in terms of injury, health, mental status and we’re lucky with the medical and sports science team that we have here. We all support each other and link very, very well.

All the players are tested on a daily basis, so there’s a whole period of tests we’re doing. We’re able to tell if players are performing as they should be. And if there are any warning signs, we’ll take them to one side, do some testing and then make a management plan based on that.

But Brendan has been supportive of the players who are fasting and so we made sure that the nutritionist saw those specific players and gave them very clear guidelines with regards to what they should be eating, both for the start of fast and to close the fast as well.

Q: Are there any particular food groups that you recommend to aid energy levels?

ZI: The main foods that we try and encourage are both slow release carbohydrates – so things like sweet potato and corn. We try to avoid quick-release for carbohydrates for the start of the fast, so anything with high sugar. You want carbs that give the energy slowly over the duration of the day.

Once they open the fast, that’s when they can have the quick-release carbs. And that’s when we try to push with regards to the protein and other carbohydrates as well. What we try and do is make sure that players don’t just have one large meal when they open their fast in the evening.

We try to make sure that they have a relatively small meal and then a couple of hours later, have another meal. So it’s far better, rather than having just two big meals for the day, to try and space it out. The other key thing is having plenty of fluids. So we also give them special tablets, which contain a lot of electrolytes and that helps with regards to their hydration during the day.

Q: Does Ramadan affect your typical day’s schedule, and if so how?

ZI: Not during the day it doesn’t. You’re still supposed to be doing all the work you would normally be doing at any other time. The only difference really is getting up that little bit earlier to have the meal first thing, which can be as early as three o’clock in the morning.

So that’s probably the only difference. From a performance point of view, yes, I may feel a little bit thirstier, but then I used to work in hospitals, and there would be times when I could go the whole day without eating or drinking. So to be honest, I don’t really notice too much of a difference.

Q: Are the players who don’t observe Ramadan supportive of your change in schedule during this time?

ZI: Yes. The majority of players are aware that myself, Kolo Toure and Oussama Assaidi are fasting and they are very curious as well. We often get grilled and asked lots questions about it. I don’t mind that at all. It’s quite endearing.

I’ll often get players like Luis Suarez and Lucas, at the end of the day, coming to me and saying: “It’s sunset, it’s time for you to eat now.” Just in case I have forgotten when to open my fast. So it is good and all the players are very supportive.

Q: Indonesia is the world’s largest Muslim country. When the club visits Jakarta during the Summer Tour, do you expect fasting will require less self-discipline as the majority of the country is also observing it?

ZI: Fasting is still going to be difficult and it is still going to require a large amount of self-discipline, but I think mentally it will help, because other people around you are also fasting as well. And the way that the whole services are set-up can help you too.

For example, in some Muslim countries, they may finish work earlier – and so the way that everything is set up is specifically geared around Ramadan. It can make it easier from a mental perspective, but at the same time you still have to fast for the same duration.

Q: The festival of the Breaking of the Feast is celebrated at the end of Ramadan. How will you celebrate this festival?

ZI: I’ll be celebrating with my family – my wife and kids. Then we will probably go to my parents’ house as well. But it’s really a time of reflection and a time to appreciate what we have got. And it’s more for the kids. I’ll be spending time with them and buying them presents.