Liverpool are closing in on a move for the Porto winger Yacine Brahimi.

According to Portuguese media, the Reds are willing to make an offer of around 60 million Euros for the highly rated winger this summer. 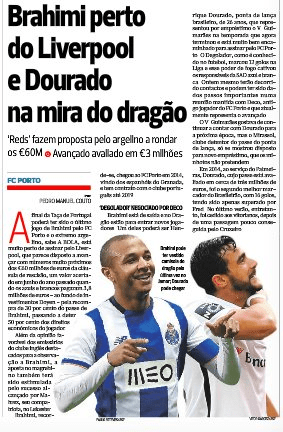 Liverpool have been linked with attacking midfielders over the last few weeks but a link with Brahimi comes out of nowhere. Jurgen Klopp’s men were linked with the Bayern Munich attacker Mario Gotze, but it appears that the German will now stay at Bayern Munich.

Brahimi will add much-needed flair and pace the Liverpool attack. The Reds have struggled to break down deep sitting defences often and Brahimi’s trickery could be a major asset for them.

However, despite all the talent and experience the player has, 60 million Euros is an absurd price to pay for him. Liverpool can definitely do better for that amount of money.

Brahimi has scored 10 goals and has provided 11 assists for Porto this season and is also a target for Manchester United and AC Milan.

It remains to be seen if Liverpool decide to match his release clause, but if they do, they will have a fantastic player on their hands, regardless of the price.