Liverpool host Newcastle United in an early Sunday kickoff with both teams knowing that their main rivals for league positions would have played out their games the day before. Liverpool will be hoping to build on recent momentum and also take advantage of any slip ups by Tottenham at Stamford Bridge, while Newcastle United – relatively safe in the league – would want to prove a point against one of the Premier League’s top sides after an encouraging 0-0 draw against Manchester United a couple of weeks ago.

Liverpool are waiting on the fitness of ex-Newcastle striker Andy Carroll before deciding whether to include him in the matchday squad – the striker is recovering from a knee injury and while he was fit enough to travel to Madrid to watch the Champions League semifinal with his team mates, his match fitness remains a concern.

“I don’t think we have found out anything new about his game. Even if you go back to his first goal against Manchester City, he rattled in one like that against us earlier in the season. We knew what we were getting before Andy came in. What you don’t know to the same extent is the personality and if there is one thing that has pleasantly surprised us it is the boy’s personality. He is a real down-to -earth boy who sometimes doesn’t realise he is a footballer but that is because he is naive and has his feet firmly fixed on the ground. That is not a criticism. That is a huge compliment to him.”

Newcastle on the other hand have lost Stephen Ireland to injury for the rest of the season.

Soccerlens Prediction: A Liverpool win, although it’s hard to see Newcastle come away without scoring a goal. You can use this free £25 bet on a 2-1 win for Liverpool, which also enters you in a contest to win £100 for free. 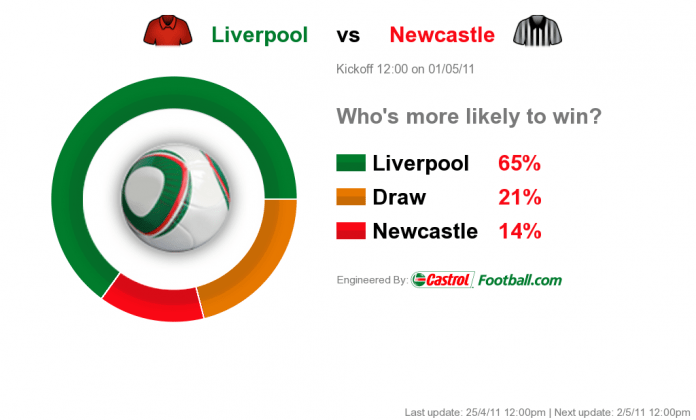 The Castrol EPL Match Predictor gives Liverpool a 65% chance of winning, with the most likely result being a 1-0 or 2-0 win. Learn more about the Castrol EPL Predictor.