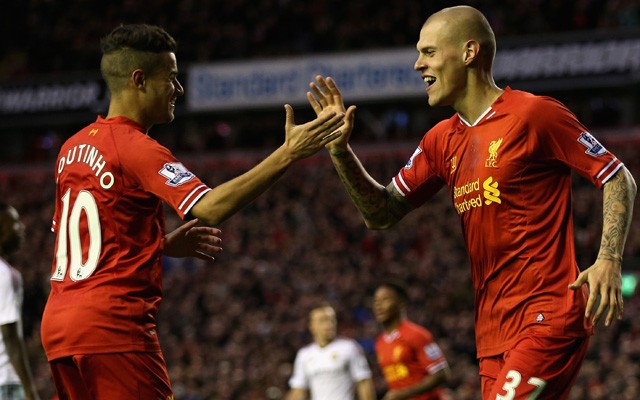 Liverpool have been encouraged by the positive news of the return of star trio of Philippe Coutinho, Divock Origi and Martin Skrtel to training this week. The Brazilian international picked up an injury after the start of the new calendar year, while the latter two have been sidelined since the busy festive period in December.

The Reds had nine fixtures in January and majority of the results did not go as expected, which includes a 1-0 defeat at the hands of Manchester United at Anfield. Jurgen Klopp missed the services of Coutinho in the attack and Skrtel’s experience in the back four during this period.

Liverpool are braced for another busy schedule as they are scheduled for eight fixtures in February (nine if they win the FA Cup replay against West Ham United). This includes the Capital One Cup final against Manchester City, two Europa League fixtures and FA Cup matches, along with the league games.

Klopp confirmed Coutinho, Skrtel and Origi will return to training and they will join Daniel Sturridge with the other first team members this week.

“[They are] closer, close to returning to training. Martin needs two or three days’ more time. Divock and Phil and Daniel should return to training – Daniel on Wednesday and the other two on Thursday. That’s the plan,” Klopp said during his pre-match press conference, as reported by Liverpool’s official website.

“And Martin, I think, at the weekend. These are our transfers… four new players for LFC! That is good for us, of course. With the really long-term injuries [Joe Gomez and Danny Ings], nothing has changed.”

Klopp will have to rotate the squad in order to keep his players fit for key clashes this month. The Merseyside club are chasing a place in the top four and are also looking to win silverware this season by defeating City in the Capital One Cup final.

It remains to be seen whether Liverpool will be able to improve their performance in February compared to that of their mixed form last month.