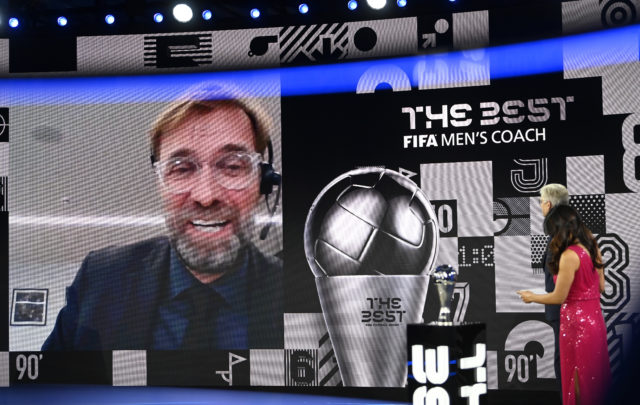 The German boss has won the prestigious award for the second year in a row, after guiding Liverpool to their first Premier League title in 30 years.

Klopp edged out Marcelo Bielsa and Hansi Flick to retain the award which was announced during The Best FIFA Football Awards ceremony in Zurich on Thursday evening.

This personal accolade is only a reflection of the success Liverpool have achieved under Klopp and it brings a lot of pride to the club. However, many Liverpool fans feel that Flick was unlucky to have missed out, especially after guiding Bayern Munich to a historic treble last season, including the Champions League.

Liverpool were simply brilliant in 2019-20 as they won the league title at a canter. Klopp also guided the Reds to two more trophies as the UEFA Super Cup and FIFA Club World Cup were followed by the Premier League title in the summer.

Klopp admitted that Liverpool had an ‘exceptional’ year, and although he is not a firm believer of personal accolades, he is ‘proud’ with the honour bestowed on him.

Here are some of the selected tweets from the Liverpool fans:

Didn’t expect it but congrats Kloppo!!

Oh woow this is a shocker 😂😂

I dont understand how he deserves it. even under kovac they were winning doubles due to their monopoly.Flick just happened to meet clubs in their transition period during a one legged cl, if you cant give it to zidane after 3 peat then there is no way goddamn flick deserves it.

Jürgen Klopp is the first coach in histore win The Best coach in the world in two consecutive years
💖💖💖 2019 🥇 2020 🥇 pic.twitter.com/yiYTsBKkdf

Best manager in the world

Dont get me wrong, I am a Liverpool fan and I adore Klopp, but how did Flick not win it

Wow! Really? Happy for him but I really think the Munich coach deserve it more.

Liverpool to win the title again?

The Reds are in the middle of an exciting Premier League campaign, where we can expect an open title race this time around.

With Manchester City failing to hit consistency, the likes of Tottenham Hotspur, Chelsea, Leicester City and Manchester United are giving an early impression that they can challenge the Reds all the way for the league title.

Liverpool still are favourites to retain the title, though. Despite losing several key players through injuries, Liverpool are still leading the league table that suggests they’re likely to get even better towards the business end of the season.