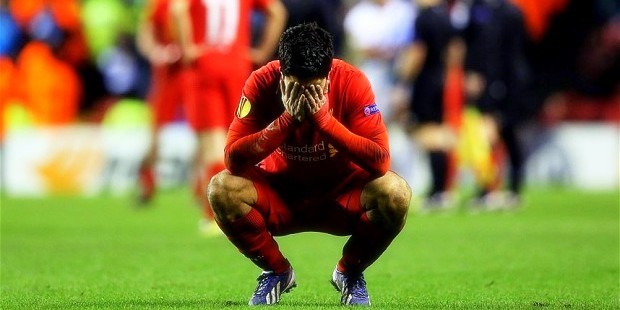 So close yet so far. When Luis Suarez scored that wonder free kick to put the game on level terms, Liverpool sensed blood, but they failed to finish off their opponent yet again. Agony followed in an emotional night at Anfield and the little Uruguayan was left devastated.

He closed his face with his hand, head shaking in disbelief and eyes watery. Brendan Rodgers kept on hollering at his players to go for the kill, the Kop reverberated with “You Will Never Walk Alone” and Liverpool fought a heroic battle – a defeat which they can look upon with great pride.

The task was daunting before the first whistle was blown. The Reds were trailing by 2-0 in the Europa League tie with Zenit St Petersburg and it became an uphill task when they trailed further behind through a horrendous mistake committed by the ever reliable Jamie Carragher.

Back to the walls and hope running against everything, the fight back began led by the talisman Suarez. Liverpool scored three, but failed to break the final frontier.

Rodgers hailed his players for such an “incredible” performance, and felt that a major step is taken in winning the war, despite losing the battle.

The passion, the commitment, the desire and the hunger shown by the players was enough to give everyone a reason to believe that the club is in the safe hands under the former Swansea boss.

One has to understand that Liverpool are still in the process of redevelopment and this is Rodgers’ first year at the club only. Now that the club is out of all the competitions, the focus shifts back to the Premier League where, Liverpool must try to close the gap with top four clubs.

Liverpool have to show ambition of getting in there, at least for the world class Suarez. The former Ajax star has time and again pledged his loyalty to this club and in order to hold him at Anfield for longer years, the Reds must carry forward the same hunger and passion they displayed last night.

Amid the frustrations, there were plenty of positives to reflect upon. So many times this season it happened that Liverpool failed to capitalize on any good performance. They need to build on these little experiences.

Rodgers said there is plenty of football left to play for and the season for them won’t finish until the final whistle. Tough words and inspiring as well. Last thing the club needs is another false dawn.