Glen Johnson’s late goal got Liverpool back to winning ways on Saturday as Brendan Rodgers’ side overcame Stoke City 1-0 at Anfield.

Victory for Liverpool could see them move back into the top half of the table.

Injuries have been kind to Nigel Pearson this season although it doesn’t appear to have given Leicester City much advantage in their matches. Summer signing Matthew Upson has been out injured since he arrived. Dean Hammond is the only other confirmed absentee for the hosts on Tuesday.

Mamadou Sakho has been out since September with a thigh injury. It was originally said he’d only be out for a couple of weeks, but the French defender has yet to return. Full-back Jon Flanagan is sidelined indefinitely.

Daniel Sturridge is still out whilst Mario Balotelli is yet to recover from his groin injury. Rickie Lambert has scored two goals in his three starts in all competitions during the Italian’s absence. 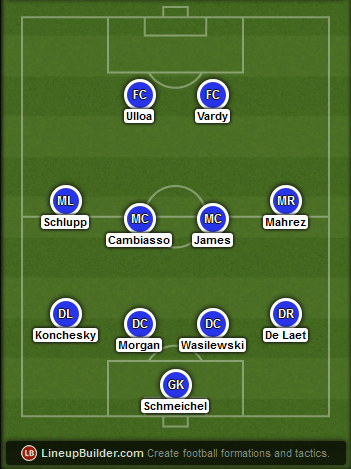 Leicester City line up in a traditional 4-4-2 formation. Riyad Mahrez is the playmaker down the right wing, whilst Jeffrey Schlupp offers pace down the opposite flank. Jamie Vardy is a hardworking forward who is a nuisance to defenders. Leonardo Ulloa made an impressive start in the Premier League but is without a goal in Leicester’s last eight games. 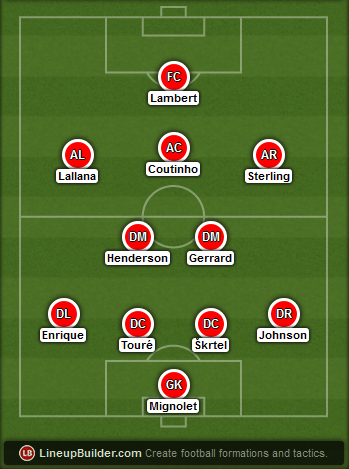 Steven Gerrard was benched on Saturday before making a cameo appearance. The club captain surely returns to the starting lineup on Tuesday. Jordan Henderson played a more advance role then but we think there’s a good chance Adam Lallana starts this one. Some pace and creativity on the wings with Lallana and Raheem Sterling should really hurt this Leicester defence, particularly left-back Paul Konchesky. Ideally they could do with some pace in the centre to cause Wes Morgan some problems.

Raheem Sterling vs Paul Konchesky
Play Raheem Sterling on the right where he caused a number of defenders issues last season and good things will come to Liverpool at the King Power Stadium. Their own fans know how slow Paul Konchesky is – the England international can certainly get the better of him in this one. Part of a poor Leicester defence that only Queens Park Rangers and Crystal Palace have conceded more goals.

Esteban Cambiasso vs Philippe Coutinho
Leicester have an experienced and intelligent former Argentina international in the centre of their midfield. The 34-year old does struggle to keep up with the quicker players and has been dribbled past several times. However, he’s making tackles and interceptions as some form of protection to the back four. Needs a big game to keep Philippe Coutinho and co quiet in this one though.

Kolo Touré vs Leonardo Ulloa
Liverpool kept a rare clean sheet in that weekend when Kolo Touré came in for Dejan Lovren. The experienced defender appears to be their best option at centre-back right now. Whilst Leicester City haven’t got too much out of their strikers of late, Leonardo Ulloa is still considered a threat. The Argentine has good movement inside the penalty area so if there’s any supply for the strikers in this match, Touré will need to be alert to Ulloa’s runs.

Prediction: Leicester City 1-2 Liverpool
We successfully called a one-goal win for Liverpool at the weekend and we’re going for the same midweek. Leicester City are way out of form and whilst Liverpool aren’t in much form of their own we believe they have the personnel to pick up three points against weaker opposition.