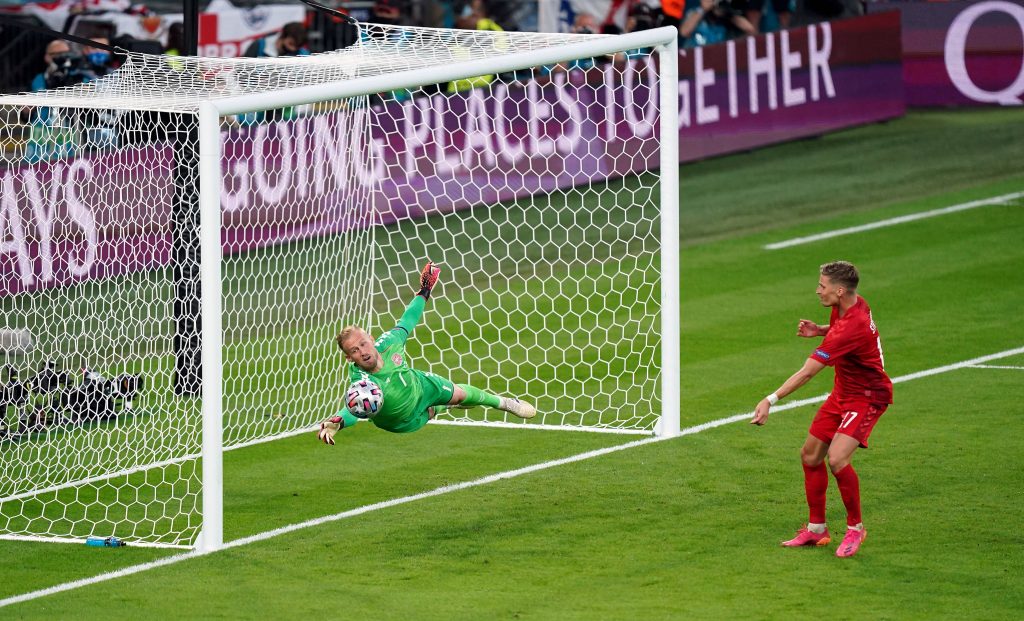 The 34-year-old produced a top-notch display over 120 minutes at Wembley Stadium, but it was insufficient as the Three Lions secured a 2-1 comeback win in the semi-final.

Mikkel Damsgaard opened the scoring for the Danes with a sublime long-range free-kick, but the hosts pulled level six minutes before the interval.

Bukayo Saka’s cross was put into the back of his own net by Simon Kjaer, with Raheem Sterling lurking behind. He would have had an easy tap-in.

Neither side managed to score the winner in normal time. The Three Lions pulled ahead in the 104th minute of the contest through Harry Kane.

The referee awarded a penalty for a foul on Sterling in the box. Replays showed that there was barely any contact, but VAR stood by the decision.

Schmeichel saved the resultant penalty from Kane, but the rebound fell neatly into the path of the England skipper, who redeemed himself by scoring.

The Foxes star was undoubtedly the star of the match with nine saves. He single-handedly kept the Danes in the game with some vital saves in normal time.

It was a bitter-sweet experience for some Foxes fans, but a few of them were impressed with the heroic display from Schmeichel despite Denmark’s loss.

Congratulations England, but what a performance by Schmeichel. pic.twitter.com/N2IDTDZVNc

Schmeichel was the best player on the pitch but alright https://t.co/ioglv9hRTZ

Glad Schmeichel had a good game

WOW. BREATHE. A FINAL FOR ENGLAND!!! Schmeichel was incredible. One of his best performances of his career surely?

Schmeichel has truly etched his name as a Foxes legend, and recently completed a decade of service with the reigning FA Cup champions.

He has two years left on his £130,000-a-week contract and, judging by his Euro displays, could carry on with the club for plenty more seasons.

He could be officially named as the new club captain after Wes Morgan’s retirement. Schmeichel will play a key role in the Foxes’ top-four push next term.