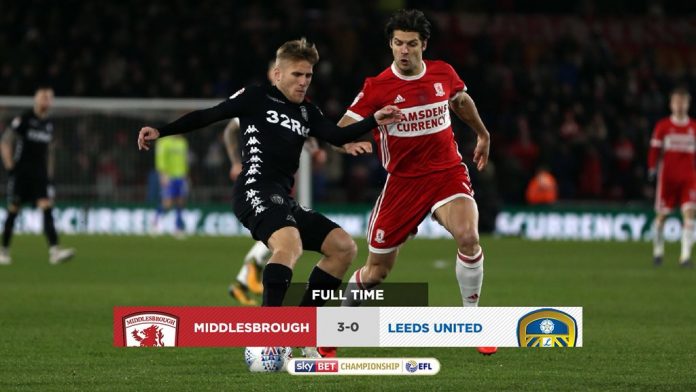 Leeds United crashed to yet another disappointing defeat in the Championship last night.

The Whites were beaten 3-0 by Middlesbrough away from home and it seems that the sacking of Thomas Christiansen is yet to have the desired effect.

Paul Heckingbottom’s men would have expected to build on their 1-0 win over Brentford last time out but they failed to create anything against a well organised Boro team. Furthermore, their lacklustre display at the back allowed Bamford to bag his first ever hat-trick as well.

Leeds United fans were understandably disappointed with their team’s performance last night and most of them took to Twitter to share their views on the result.

The Whites are currently 11th in the Championship table. They have conceded 46 goals so far this season, one less than they conceded in the entirety of last season.

Leeds have won just one of their last twelve matches in all competitions and the players must work together to get the season back on track.

The way leeds treat those fans who travel week in week out and who pack elland Road is a disgrace. Deserve so much more, fans doing their part all the time, players and upper management not reflecting that. #lufc

Refund all travelling fans. Bad enough getting to the game. For them to then watch that. Unacceptable #LUFC

Shocking performance, mid table obscurity season… all we want as fans is to see passion on the pitch. Feel sorry for the ones who went today in shitty weather and even worse travel policing.

Need a change of system and to freshen up the squad. We have alot of good young lads. Give them a game. Peacock-Farrell has to start next game.