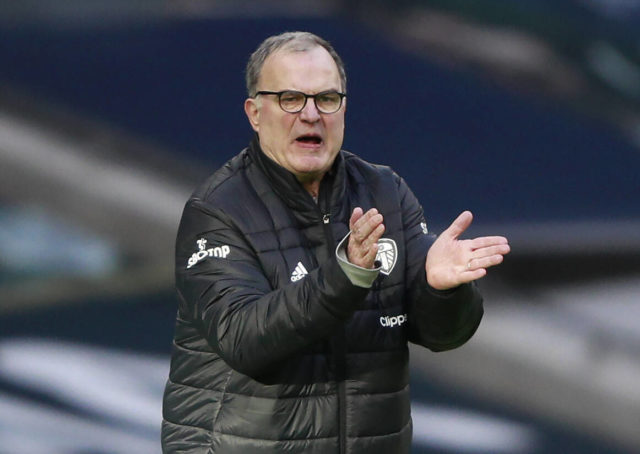 Leeds United fans are not impressed with what former Aston Villa striker Gabriel Agbonlahor has said about the Whites following their latest defeat against Tottenham Hotspur.

Speaking to TalkSport, Agbonlahor has criticised Leeds’ style of play, suggesting that the Whites are a ‘bit naive’.

Leeds suffered a 3-0 defeat against Tottenham Hotspur in the Premier League on Saturday, and once again their style of football has come under criticism.

While Leeds have been very impressive against mid-table or teams below them, Marcelo Bielsa’s side have struggled against top sides in the Premier League.

Agbonlahor has claimed that most teams change their style depending upon the opposition they face, but Leeds don’t seem to change their approach while playing against big teams.

Many Leeds fans have taken to Twitter to express their views, and they don’t seem to agree with Agbonlahor’s observation.

But Villa still lost so what’s the difference in approach

Talks about Leeds all the time because he’s obsessed with us. always wanted to play for LUFC but wasn’t good enough. Villa only stopped up last year through cheating. LUFC will stop up by playing and attacking

Its not naive, its having the confidence in your players and allowing them to do what they do best. Look at West brom, set up to defend and failing. If Leeds parked the bus we would be crucified by the media and pundits.

‘Most teams change’. That right there is where the problem lies. We don’t fall into this bracket of what most teams do. We do what our manager wants

Leeds sit 12th in the table… first season back in the @premierleague, I don’t think they need to change anything, the club and fans are very happy with what they have! Obsessed Pundits just chatting shit! Leave @LUFC to do what they want! 🆖

It is also a style of play that will improve as we sign better players. With what is essentially a Championship squad we are able to beat teams as high up as Everton. We will compete with better clubs more consistently with our current style of play once we have better players.

Everyone is quite entitled to have an opinion.
Leeds play a brand of football that will see us comfortably retain PL status, and the players, who have played Championship football in previous years, will gain valuable experience for years to come.
Have a nice day.

Disagree , take a threee game span.. play cautiously might then get three draws.. play their way , and get 1 win .. same 3 points .. and a joy to watch ….

Saying ‘Leeds are naive’ is such a lazy, unoriginal take & I think a ‘professional’ pundit would want to give a more insightful, nuanced opinion rather than Bielsa should change his tactics which will not happen anyway.

Give it a rest. Hated adored but never ignored.

A lot has been said and written about Leeds United’s style under Bielsa.

While it can be argued that Leeds could have done better against big teams if they had taken a defensive-minded approach, there are counter-arguments as well.

This is Leeds’ first season in the Premier League after 16 years, and they are doing absolutely fine. The primary aim for them is survival and they should be able to achieve their target this season.

With better players, and more investment in the side going forward, Leeds are expected to get even better. This is the best Leeds can do with the squad available.

The comparison with Villa is also not apt. Villa have spent ridiculous money since returning to the Premier League, and yet they were close to getting relegated last season.