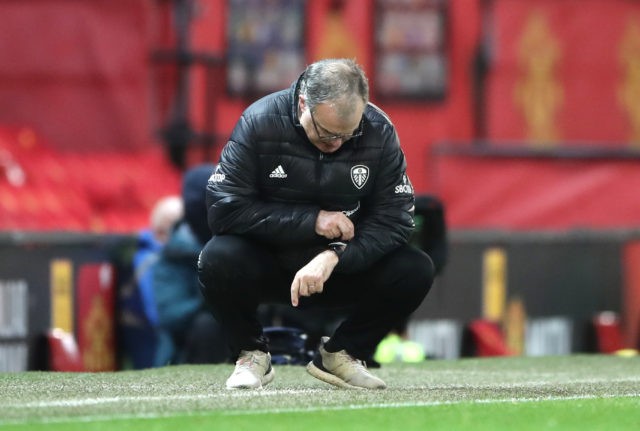 Leeds United will face Burnley in the Premier League clash on Sunday.

The Whites will be looking to bounce back from the heavy 6-2 defeat suffered against bitter rivals Manchester United in the previous game.

Marcelo Bielsa’s side has now lost three games in their last four matches, and Leeds’ style of football has generated a lot of attention in the press recently.

Ahead of the game, Bielsa was asked to comment on whether he prefers style over results, the Argentine has given a lengthy reply. You can read the entire speech here.

The Leeds boss has spoken about various aspects of the game against United, and how the narrative has been falsely circulated about them.

Bielsa feels that the analysis of the game hasn’t been accurate, and admitted that he couldn’t anticipate beforehand how influential Fred and Scott McTominay would be.

Many Leeds fans have taken to Twitter to express their reaction, and the majority of them feel that the Whites shouldn’t abandon their style.

Yeah let's just rip up 2 years of hard work because some pundits don't understand how we play.
Bellends.

Because the press do not yet understand they want to drag us down to the mediocrity of the common denominator. True bravery demands we challenge the status quo. First comes innovation, then comes progress, and then others will follow

Exactly he's playing to the strength of the players he has and is doing well stay up and kick on! Klick needs upgrading not good enough and so does the defence

No way should he change, I'd be disappointed if he did. Love these up and down results never know what you're going to get.

He has the best win ratio of any manager in our history, so I understand, playing glorious football. It seems churlish to ask for more…

Leeds play an eye-catching, entertaining football, and it earned them promotion to the Premier League. While their high intensity and gung-ho approach looks pleasing to the eye, their frailties at the back have been brutally exposed.

The Whites have been conceding goals very cheaply, and they are not doing well enough against set-pieces.

Bielsa is a very stubborn manager and Rio Ferdinand has rightly pointed out that Leeds won’t change their philosophy irrespective of the result. The thing with them is it’s hard to predict what to expect next from them. They can destroy Burnley with a big-margin win, or can end up conceding silly goals.