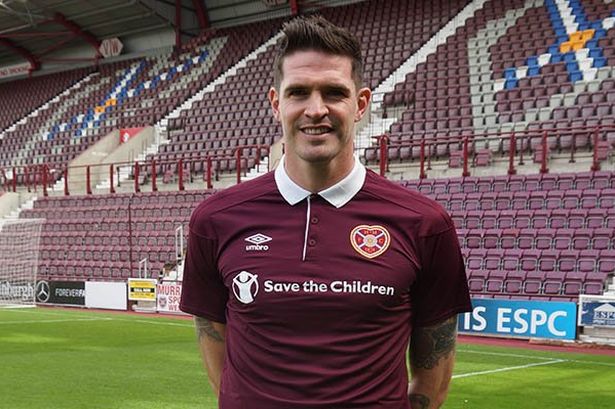 Glasgow Rangers boss Steven Gerrard has been targeting to bring Kyle Lafferty to the Ibrox club in the summer transfer window.

The Gers have made as many as eleven signings in the summer, but Gerrard is still keen to add one more player before the transfer window closes at the end of the month.

Rangers are looking to add a striker to their ranks and have been linked with a move for the Heart of Midlothian striker this summer.

The Ibrox club have made as many as two bids for their former striker. Rangers’ initial bid of £200,000 has been turned down by their Scottish Championship rivals with Hearts demanding at least £750,000 for the 30-year-old.

Former Rangers skipper and club hero Lee McCulloch believes that Lafferty will be an excellent addition for the club, and he would add competition to the 22-year-old Rangers forward Alfredo Morelos for the strike department.

“Kyle hasn’t been a prolific scorer throughout his career but he is a scorer of important goals, as he showed with the winner for Hearts against Celtic,” said McCulloch, as quoted by The Evening Times.

“His goal return is good, he got 19 last season for Craig Levein’s side, and he would certainly add something to the Rangers attack.

“He can play as a target man, he can run in behind, he can play as a lone striker or he could play alongside Alfredo Morelos. In fact, I think he would be the ideal partner for him.”

Would be a good signing for Rangers

Lafferty will be an excellent addition to the club in more than one ways. First, the Northern Ireland international, who has 67 caps for his country, has been in good form, scoring 19 goals last season in all competitions for Craig Levein’s side.

Secondly, he knows what is expected of him, and being a former Rangers player and a league winner with the Gers, he can bring his wealth of experience and leadership to the side.

Thirdly, he will add sufficient depth and quality to the squad and will push Morelos for places. Gerrard would love to have selection headaches, especially if two of his strikers push each other for the starting role.

But most importantly, Lafferty is a versatile forward who can play behind the striker as well, and so will fit in any system according to the situation.