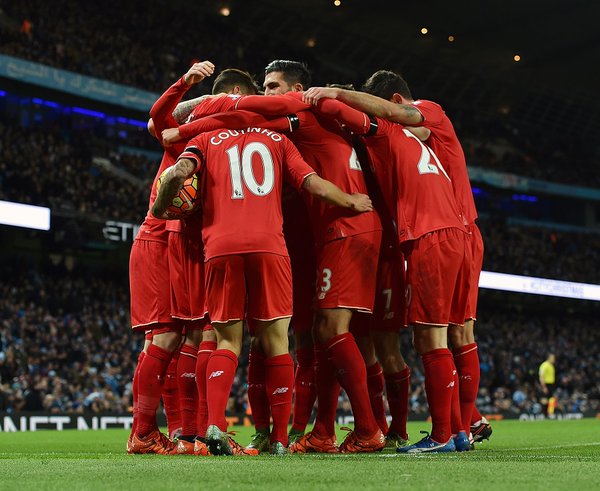 Liverpool put on an exquisite performance against Manchester City as they won 1-4 at the Etihad Stadium. Goals from Roberto Firmino, Philippe Coutinho, Martin Skrtel along with an own goal from Eliaquim Mangala ensured the Reds came out on top. Sergio Aguero’s beautiful first half strike couldn’t get the Citizens back in the game after Liverpool’s emphatic first half performance.

Here are three things we learnt from the win:

1. Klopp with a masterclass

Jürgen Klopp decided to go with the same team that won away at Stamford Bridge which meant there was no proper striker on the pitch and Roberto Firmino played as a false nine. The plan worked once again for the Reds. The front three of Adam Lallana, Roberto Firmino and Philippe Coutinho caused massive problems to the woeful City defence.

The entire Liverpool team carried out Klopp’s plan very well, if not absolutely perfectly by his own admission. They pressed the ball from the get go and did so with massive amount of energy. The first two goals were due to the team pressing as a unit and forcing City players to lose the ball. Emre Can, James Milner and Alberto Moreno were also very influential in Liverpool’s win but basically, everyone played a crucial part. All in all, it was a perfect team performance where every player contributed towards the eventual win.

Liverpool’s Brazilian duo wreaked havoc at the Etihad Stadium and ensured the visitors won the game in the first half itself. Coutinho now has four goals against Manchester City, and more importantly has four goals in the last three Premier League games. The 23-year-old, as talented as he is, hasn’t been too consistent with goals. However, following a dip in form, he has looked extremely threatening recently. 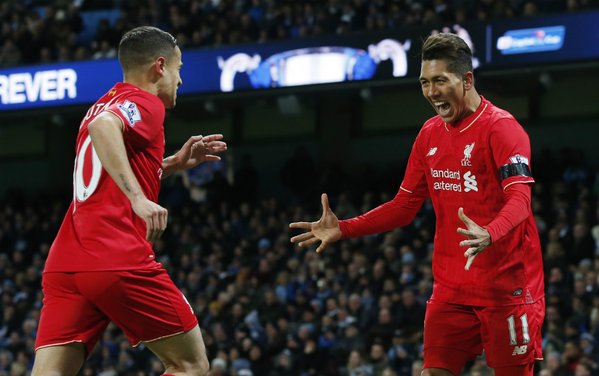 Coutinho was Liverpool’s chief orchestrator and linked up wonderfully with international team-mate Roberto Firmino. The two were responsible for all three of the first half goals. It was the former Inter player who won the ball from Sagna through his relentless pressing, played it to Firmino whose pullback was tucked in to his own net by Mangala. Firmino then set up Coutinho for the second goal, and Coutinho soon returned the favor as Firmino scored his first Liverpool goal.

Fans witnessed a beautiful partnership that has the potential to become something truly special. Did I hear “SAS”?

3. What was wrong with the City defence?

This is the first time Manchester City conceded four goals at home in a game since 2003. The side missed captain Vincent Kompany massively. Pellegrini’s decision to bench Nicolas Otamendi, someone who has done really well in recent weeks, was a strange one especially in hindsight. Fatigue from international travel might have played a part but Pellegrini must be thinking that a tired Nicolas could have done a better job.

Sagna and Mangala look like broken men, Demichelis every inch a man who barely plays and the midfield clueless. City scarcely recognisable

The City defence was all over the place and if not for Joe Hart’s magnificence, they could have lost more embarrassingly. City’s back four of Sagna, Kolarov, Mangala and Demichelis won just 1 tackle between them in the first half. They simply couldn’t deal with Liverpool’s pressing and were continuously forced to give up the ball and make mistakes.

Even apart from being forced to make mistakes, the City defenders looked extremely casual with the ball and left big holes for the likes of Lallana, Firmino and Coutinho to exploit. If Pellegrini’s side has to win the Premier League, they need to pull up their socks and ensure they don’t have big slip ups like this game.