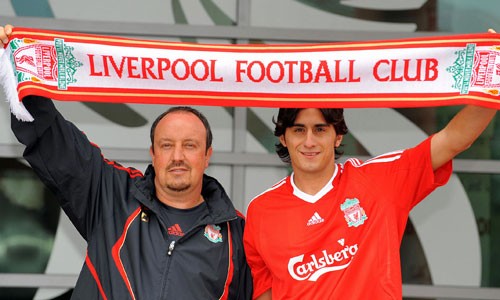 Have you every played the game “Kill, marry or shag”? In it, one player gives his or her opponent three names – it works best with celebrities. Made famous in the TV show “30 Rock”, the “player” then has to – hypothetically – kill one, shag one and marry one. It sounds worse than it is and is played most often after several bottles of intoxicant.

It seems that manager Kenny Dalglish is going to have to play a real-life game of “Kill, marry, shag” with the Liverpool midfield. Metaphorically, of course, though I’m sorry about the mental imagery you’re now experiencing. The game suggests it requires a person to commit to one person, dispose of another, and have a fleeting dalliance as a third option. With his midfield packed to the extent Scouse fans both celebrate and gnash teeth, thinning out the crowded Mersey midfield is his first priority.

So who should King Kenny kill (ie. sell), marry (commit to) or shag (try out) before season 2011-12 begins? Please note I’m using these terms as metaphors rather than inciting violence or any other kind of personal act!

Steven Gerrard – Marry, though perhaps this isn’t as cut and dried as in past years. Gerrard is the best player of the last twenty years on Merseyside. Though he’s getting on in years and can’t be relied upon to play a full season, selling him would be perhaps the only thing that could dent King Kenny’s popularity in Liverpool outside of signing Gary Neville. With more support and backup, perhaps he’ll compile a less injured season.

Maxi Rodriguez – Tough one. With Kuyt, Maxi seemed to be revitalised more than any of his Scouse teammates, yet his position is now no longer certain due to the presence of new arrival Downing. He managed two hat-tricks last season, so he’s more than useful but seems amenable to a change in scenery and even a return to South America. Shag, probably in a difficult decision.

Jay Spearing – The Liverpool youth was given an opportunity at the end of last season and made full use of it. However, his ability – especially to take over from the greats who preceeded him – is highly questionable. At 22, he needs a consistent, quality season to prove he’s good enough to stay at a club with Champions’ League aspirations. This dichotomy makes him the epitome of a “shag”.

Jonjo Shelvey – From a highly touted youth career at Charlton to Merseyside via the England Under-21s, the next step for Shelvey, unlike Spearing is to impose himself on a first-team somewhere. Anywhere. With new additions plus a potentially revitalised Gerrard, it may be he goes elsewhere temporarily to find gainful employment. Shag, but keep an eye on the future – at this stage, he could be anything: good or bad.

Charlie Adam – It seems curious and harsh given the Reds lengthy courtship and respectable transfer fee paid (₤8 million), but the question marks surrounding Charlie Adam’s ability to play at the absolute highest level place him in the Shag category. While technically gifted, his body shape is against him and he’s been signed from a club who gave him carte blanche as featured player. How he fits into a slower tempo game, with other exceptional passers is still a topic of much debate. Should he fail, he’s likely an easy-sale type of asset. If he works out, Liverpool have a fantastic player.

Raul Meireles – After one year divided squarely across Pre/Post Kenny’s arrival, Meireles may be the easiest sale of all Liverpool’s midfielders. He has a good but not overly generous contract, he performed well in replacing the injured Gerrard, he has Champions’ League and World Cup experience and can play a variety of roles. Those skills make him invaluable to the Reds as well, however, and his grittiness can provide a good and classy counterpoint to Gerrard’s or Adam’s silky offence. Marry him, Kenny, before he gets another offer.

Christian Poulsen – He could be the most unpopular player to grace Anfield since Harry Kewell. That’s not because he’s spiky, outspoken or uncouth – just that (comparatively) he’s not very good. He didn’t play well for the man who brought him in, Roy Hodgson, and Roy’s pink slip may well have been stamped with a picture of Poulsen’s face. It would take a near miracle for the Kop to embrace him amidst the new hope brought by Henderson, Carroll, Suarez and Downing – it’s time to kill his Liverpool career and move him back to the continent.

Lucas Leiva – Once a near-pariah, he’s now established himself both in the Brazil midfield and in Liverpool’s. Though he doesn’t do anything – except perhaps tackle – outstandingly well, he does everything to a level that’s much better than any potential replacements. For this evenness of skill alone, he’s worth marrying.

Alberto Aquilani – While owner John W. Henry has recently come out in support of the perma-crocked Italian, he hasn’t convinced many (any?) during his time in the northwest. Kill him, quickly, by selling him to whichever Serie A club is willing to take him and his wage packet. If the Scousers are holding out for price parity, they may be very disappointed – it’s time to accept a loss on his ₤17 million purchase-price.

Milan Jovanovic – In a year of disappointments, the Serbian was perhaps the greatest. As soon as a suitor can be found, he’s gone. In many respects, given Jovanovic’s public statements that he’s unhappy in Red, it could be a mercy killing.

Jordan Henderson – The youngster has arrived with a hefty price tag from Sunderland, meaning he’s switched coasts for the foreseeable future. He’s got talent and industry in loads, but needs developing. Given the preference Dalglish has for youth (buying Suarez, Carroll and Henderson), developing this youngster in concert with Under-21 counterpart Carroll should become the gaffer’s highest priority. For better or for worse, Dalglish has married the young Englishman.

Stewart Downing – For all the moneyball philosophy spouted about his reported ₤20 million signing from Aston Villa, Downing is a good, if not great wing presence with a desire to prove himself in the Champions’ League. He will play and perform well, but may not make any forget former famous wide-men like John Barnes. He has no Champions’ League pedigree, making him appealing but needs more proof before he becomes more than worth a shag.