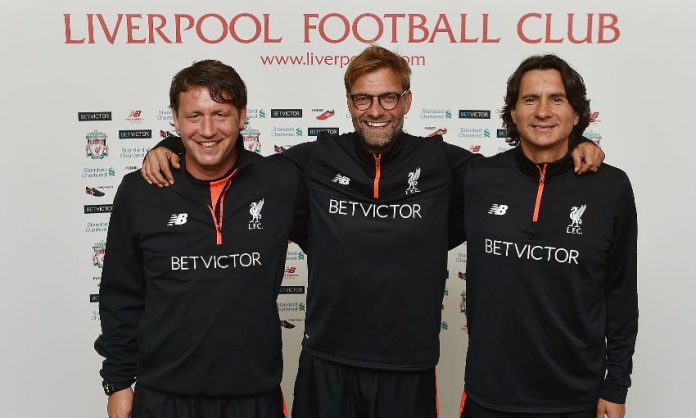 Liverpool owners Fenway Sports Group are thought to be very impressed with the former Borussia Dortmund manager and have decided to extend his stay at Anfield.

Klopp guided Liverpool to the finals of the Capital One Cup and the Europa League during his first few months in charge after the sacking of Brendan Rodgers.

Jurgen Klopp’s initial contract with Liverpool was set to expire in 2018, but the German will not stay at Anfield up until 2022.

The German manager has a great relationship with the owners and the Americans have now reciprocated their faith in him by offering him the new contract. Furthermore, Klopp’s belief in coaching and his handling of youth has impressed the owners as well.

Klopp will be looking to make a good start to the pre-season when Liverpool take on Tranmere later today. The Reds have long and challenging pre-season schedule ahead of them as Klopp looks to prepare his players for the 2016/17 season.

Principal owner John Henry, chairman Tom Werner and FSG president Mike Gordon jointly said: “When you have an individual of Jürgen’s quality in the building it makes perfect sense to secure that person for the long term. To not do so would be irresponsible.”

“The overriding motivation behind this decision is Jürgen’s commitment to overall improvement and development. In Jürgen we have someone who is always looking ahead, always looking beyond his own wants and needs and putting the club first.”

“The ideas and plans he has for the football infrastructure excite us and we believe it benefits the organisation to have Jürgen committed to Liverpool for a sustained period, to make sure he is here to oversee this development. By making this commitment to him, we are taking away any future distractions or doubt. We will move forward in partnership together, with confidence in each other and with the club’s future at the forefront of every decision.”

“He is a world-class managerial talent and his leadership will be critical to everything we hope to achieve in the years ahead.”

Klopp said: “It’s hard to express in words how honoured myself, Zeljko and Peter feel by the commitment shown in us by the ownership and the club in general.”

“We are very much at the beginning of our journey, but to already have the connection we have with this very special place is incredible.”

“I am the first to recognise that with this great commitment comes a great responsibility. All of our coaching careers we have looked to make teams and clubs better, with the ultimate goal of making the supporters proud and happy.”

“To do this we have to make sure we always put player and team development at the heart of every major decision. It is my job to lead that and ensure every element of the LFC football environment reflects the best practices in the game. It is fantastic that the club’s ownership is just as committed to this as we are.”

“There is much to do and much to achieve and we look to do this by being the most completely together group anywhere in the world. That’s everyone and we all have responsibility for it – all of us who are part of this LFC family: players, staff, ownership and of course the supporters.”

“By being together at all times, we will be stronger, better and our successes sweeter.”