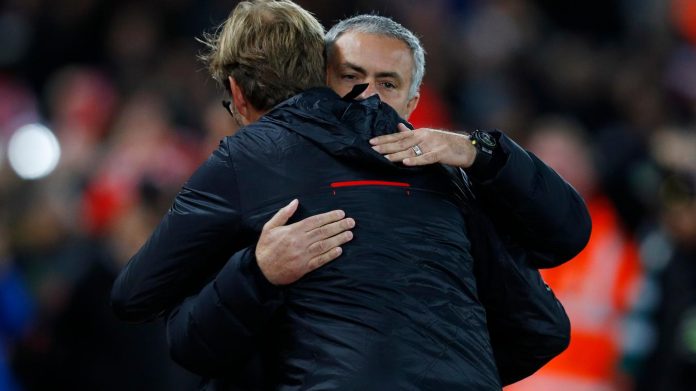 Liverpool manager, Jurgen Klopp, has hit back at José Mourinho for trying to spark a war of words following Monday night’s match against Manchester United.

The Premier League game ended 0-0 and Mourinho was criticised for his defensive approach to the game. In response, Mourinho claimed that the media have built a hype around Liverpool’s good start to the season and were portraying them as the “last wonder of the world.”

Jurgen Klopp has revealed that he is not interested in Mourinho’s tantrums and would rather concentrate on the game ahead. The German explained that he has already learned his lessons from the match and has moved forward.

Furthermore, Klopp also highlighted the fact that a war of words will not bring his side the three points and therefore he is not interested in it. The Liverpool manager also requested the media to stop bothering him with such questions.

Klopp is quoted as saying by The Liverpool Echo:

I am not interested. I thought the game was over, and if we do not have extra time then why should I talk about it? For me, it is always like this. What I don’t like too much in the world of media is this; you write what you hear, and not what you see. I could say what I want, obviously, and you would write it. And a few people would think ‘hmmm, maybe he’s right’ or ‘hmmm maybe he’s wrong’, whatever. But I don’t care what people say after the game. I saw the game already, I know what I have to learn from it and all that.

Klopp’s Reds host West Brom at Anfield later today and the Merseyside giants will be hoping to bounce back with a win. The Baggies have an impressive head to head record against the Reds and Liverpool will have to work hard to pick up the three points.

Liverpool fans will be happy with how Klopp has dealt with this situation. It will certainly benefit their side if the manager is focused on the next game instead of spending his time insulting other managers.