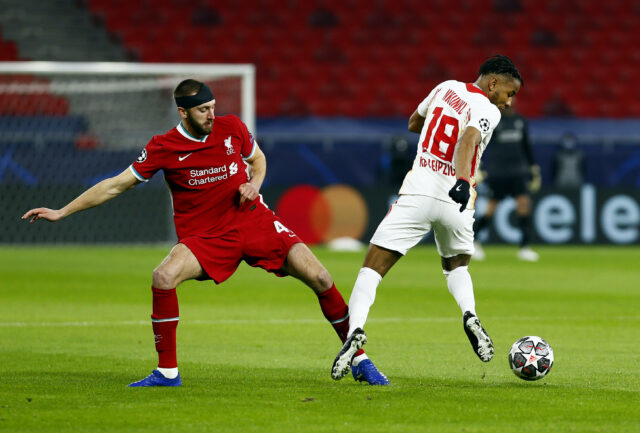 Liverpool boss Jurgen Klopp has showered heaps of praise on defender Nathaniel Phillips for his outstanding performance in the Champions League on Wednesday night.

The Reds returned to winning ways with a 2-0 win over RB Leipzig in the second leg, and 4-0 on aggregate to move to the quarter-finals of the competition.

The 23-year-old, who wasn’t registered for the group stages, put in a massive performance against the German outfit.

Partnering alongside Ozan Kabak, it was one hell of a shift from Phillips, and Klopp was full of praise for him after the match.

“What a boy he is, what a player he is, what a night for him – absolutely great. The concentration level he shows is incredible,” Klopp said.

He’s an aerial monster and on the floor not bad. He had the honour of playing a CL game and he won it. I am really happy for him.”

Phillips has one more year left on his present deal at the club, and chances are high that it will be renewed.

He has been brilliant in the Premier League and has now made a strong impact on his Champions League debut for the club.

His partnership with Ozan Kabak allowed Fabinho to drop in midfield and it made a huge difference to the side.

James Pearce of The Athletic was also full of praise for the defender, saying – “He was so good. Certainly repaid the manager’s faith. Deserves a run in the team.”

In other news, check how Liverpool players reacted to the win against Leipzig.