Jurgen Klopp Debate: The Reds boss should be celebrated and not mocked 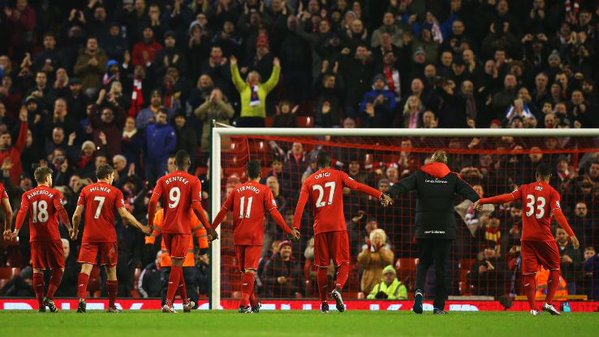 Liverpool manager Jurgen Klopp took his team to thank the Liverpool fans, after the Reds drew 2-2 with West Bromwich Albion.

Moments later, social media was flooded with reactions from all over the world – two camps divided – Liverpool fans supported his gesture while the German was criticised by many pundits and fans of other clubs.

It was a hard earned draw, and it took Liverpool 94th min to find an equaliser. So, when Klopp took his team to say ‘thank you Kopites’ in hand-in-hand ‘take a bow’ salute, it created a shockwave among the English fans.

Many thought it was a celebration and mocked Klopp for this gesture.

No better way to celebrate a 2-2 draw against West Brom than this. pic.twitter.com/kmzEs7fcaX

Well actually it was not a celebration at all. It is a common practice in Germany and other European countries, where clubs thank their fans for their tremendous support irrespective of the results after their match. 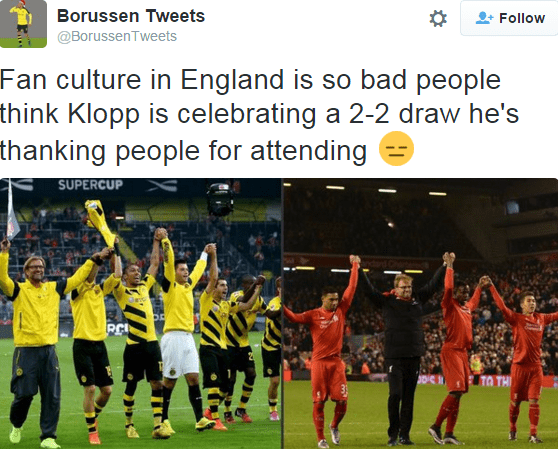 It was definitely new to the English fans, however.

Mocking it just shows how some Premier League fans are out of touch with reality when it comes to anything outside of the England bubble. — Rafael Hernández (@RafaelH117) December 13, 2015

Iain Macintosh, a journalist I like very much, wrote in his column,

“Look, we like Jurgen Klopp in these parts. He’s enthusiastic and he seems to mean well. But we’re not sure about him orchestrating that jubilant, hand-in-hand mass salute to the Liverpool fans. It’s nice that he wants to improve the relationship between the supporters and the players. It’s nice that he wants to inculcate the Premier League with some of the Bundesliga’s more heartwarming traditions. But this is Liverpool. This is Anfield. They have seen the best of the best there. You do not gleefully salute them when you salvage a point against West Bromwich bloody Albion.”

Klopp said after Liverpool’s defeat to Crystal Palace that he felt alone, after a majority of Liverpool fans left the stadium, when there was some 10 mins left to play.

He said at the day of his unveiling that “Liverpool are a special club”. He didn’t mention about the club’s legacy (number of titles won) in details, as other previous managers have done before him, but he spoke about the famous Liverpool fans.

And that’s why he was and still is so loved by the Borussia Dortmund fans. If Liverpool fans have seen the best of best at Anfield, the same goes for Dortmund too at Westfalenstadion (in their own way) but he is loved not because he won few trophies – the fans felt an identification with him.

This gesture goes to the fans to show what Rory Smith said “You need us, we need you, sort of thing”.

Klopp’s approach to football has so far been refreshing, devoid of all elitist dogmas. It is no wonder he won’t be bound by the style and mannerisms of English football that is deeply rooted to this country’s culture.

He is trying to bring his own values to the English landscape and that is why some of his acts may seem at odds with the standard roles of a manager in English football and how a football man should communicate with the media and the fans in England.

However, one cannot stick to age-old ideas and be open to new winds of change and be ready to accept some honest communication, howsoever weird it may seem at first glance.