The stars of the EPL seem to have taken a sabbatical as many of them have failed to make an impact for their teams over the past 2 matchdays. So in this article, we will be introducing a new metric that we have been measuring. We call this new metric Point Efficiency. Based on this metric, Manchester United’s Juan Mata is the most efficient offensive player in the EPL this season thus far.

Those following us will recall that we distribute the value of a goal amongst all players that have a significant involvement in the goal. This is why you will see decimal values in the chart below. 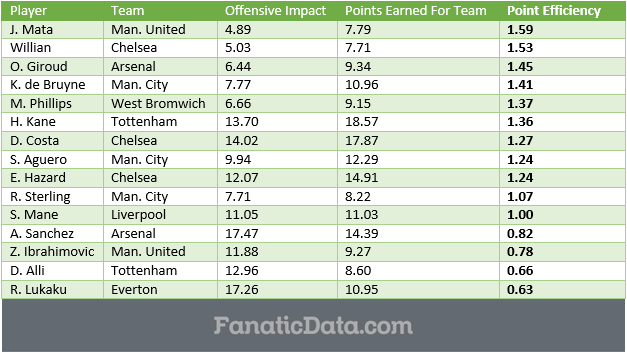 The players above are all ranked in the top 15 for the Most Valuable Offensive Player (MVOP) rankings.  Harry Kane is the current MVOP leader with 18.57 points earned this season for Tottenham. When it comes to Point Efficiency though, Juan Mata is the EPL’s Most Efficient Offensive Player.

Juan Mata’s Point Efficiency score of 1.59 suggests that every one of his involvements in a Man United goal this season has earned his side an average of 1.59 points. The max a player can have for Point Efficiency is 3. A top score of 3 would suggest that the team earns 3 points off of every goal a player is involved in. This is a very difficult score to achieve this late into the season.

Seeing the sizeable difference between Juan Mata’s score and Everton’s Romelu Lukaku’s score of 0.63 shows how impressive Mata’s score is. Mata’s involvement in goals has earned his team 2.5 times more points on average than Lukaku’s involvement.

For this reason, it is likelier that a lot of Mata’s involvement in goals came in matches where Man. United were able to earn victories against poor defenses.

To see how we measure points earned by offensive players and Offensive Impact, click here.

Check back in after Matchday 32 to see the latest MVOP rankings.